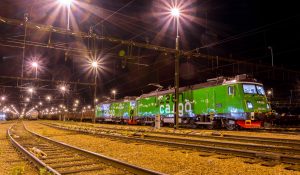 The new electric locomotive fleet will be annually delivered in a ten-vehicle batch, which will ensure a continuous workflow at Softronic’s plant in Craiova, in the south part of Romania, until 2030.

In 2017, the two companies signed a EUR 6 million contract for the supply of two locomotives and one year later, the operator ordered six additional locomotives. Following the further orders, the railway operator will have a TransMontana fleet of 16 ordered vehicles, of which 10 locomotives were delivered and are already operating.

According to Green Cargo, the locomotives offer the customers an increased capacity and safety while reduces the transport costs. In addition, the vehicles are equipped with systems and components adapted to the Nordic climate. They are also friendly-environmental as the energy consumption is lower. The electric trains of Green Cargo make up over 95% of its tonne-km which means that the climate impact is almost next to zero. Every 24 hours, some 400 freight trains depart, replacing around 9,000 truckloads on the road network.

The operator serves close to 300 locations in Sweden, Norway and Denmark through its network, and with our partners we reach all of Europe. The company transports 22 million tonnes of freight, and has 1,800 employees with annual sales of about SEK 4.1 billion (EUR 398.48 million).

Softronic manufactured 52 TransMontana locomotives during the last ten years that are operated by seven private rail freight operators from Romania and abroad.

TransMontana is the successor of a series of locomotives manufactured by Softronic own projects, but it is the first one with asynchronous traction motors. The new locomotives combine Softronic experience of over 12 years in modernisation, repair and manufacture of locomotives with innovations systematically oriented to customers benefit and cost effective.
The six-axle electric locomotives are equipped with a 25 kV 50 Hz by-system transformer powering six asynchronous engines. The locomotive can reach speeds of over 200 km/h.