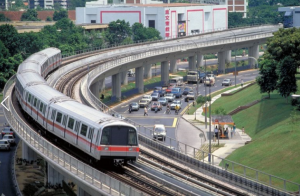 The renewal of the power system includes the replacement of 1,300km of power cables, 250km of fibre optic cables, 206 power transformers, 172 switchboards and equipment in 171 substations.

Works to replace the NSEWL’s track circuit system are also in progress. Currently, about a quarter of the works has been completed, with the stretch between the NSL’s Bukit Batok to Khatib stations fully replaced. The new track circuit system will be able to automatically detect broken rails that require repairs and speed up service recovery efforts following a track circuit fault. The replacement works are expected to be completed around 2022.

To renew the train fleet, Bombardier has commenced the manufacturing process of the new trains which will be delivered progressively from 2021.