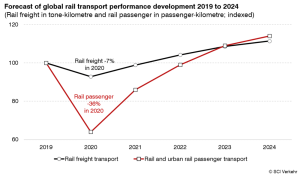 The worldwide railway market will grow by 2.2% per year to EUR 213.2 billion in 2024, according to a new study released by SCI Verkehr. In 2019, the global railway technology market had a value of EUR 190.9 billion.

The company estimates a significant reduction in passenger numbers for long-distance, regional and urban rail transport of approx. 35% in 2020, caused by contact and travel restrictions as well as distance rules, due to COVID-19 pandemic.

The rail passenger transport will record a 36% decrease (in passenger-km) strongly affected by the pandemic and the measures implemented to contain the spread of COVID-19 infections.

The financial situation of many railways and especially of the urban transport operators is problematic. Due to a drastic decline in ticket revenues, combined with a high capacity supply necessitated by distance rules, these companies are lacking a considerable amount of money for ongoing operations and even more so for necessary investments. The market for rail technology products dedicated to urban transport is therefore growing only very slowly at 0.4% per year until 2024, SCI Verkehr says.

The company also says that the most important development driver for the worldwide railway market in the coming years is climate protection. The prerequisite for lower transport-related CO2 emissions is a significant shift of passenger and freight traffic to rail, which will entail a comprehensive expansion of rail infrastructure and transport capacities, including alternative drive technologies such as battery operation or hydrogen.

More rolling stock manufacturers are exploiting the hydrogen technology to develop hydrogen rail vehicles while more and more railway operators are already testing the new trains which will replace the diesel vehicles. At the same time, the governments are committed to decarbonise the transport sector by promoting and developing the railways and embracing the new technologies which will bring the added value for the railway transport sector. Italy, the UK, the Netherlands and Austria are testing the hydrogen train technology, while in Germany such trains are already in operation since 2018.