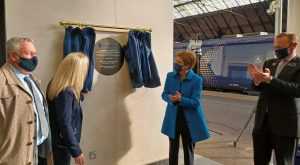 The officials unveiled two plaques at the event, the first a replica of the station plate from 1881 celebrating the completion of the station’s Victorian barrelled roof and the second to celebrate the current redevelopment.

“This new Glasgow Queen Street Station, delivered as part of the Edinburgh Glasgow Improvement Programme, is a shining example of how we can modernise historic and iconic stations, offering greener transport hubs that are more attractive to commuter, business and leisure markets alike. This station led the city through industrialisation and it now stands out as an example of what we can achieve as we navigate our way towards net-zero,” Nicola Sturgeon said.

To redevelop Scotland’s third busiest station, GBP 120 million (EUR 141.1 million) was the investment value of the project that was implemented by Transport Scotland, Network Rail, ScotRail and Balfour Beatty, the main contractor.

The extended station boasts a larger concourse than before with double the circulation space for passengers and it is also fully accessible with lifts into the new building from Queen Street and step-free access from Dundas and North Hanover Streets.

The facilities for passengers and customers have also been improved with a new travel centre, toilets and Changing Place.

Work on redevelopment began in 2017 when engineers started to demolish the 1970s buildings in front of the Victorian station to clear the space for the new expanded concourse.

At the end of 2018 the expanded station’s steel frame began to go up, and Queen Street took on its distinctive new shape in September 2019 when the last of the 310 glass panels on the station frontage was installed. Inside, the station’s old travel centre and staff accommodation block on Dundas Street gave way to a lengthened platform 1. The other four platforms (2, 3, 4, 5) were all extended by 26 metres and all platforms were electrified to accommodate ScotRail’s new, longer Class-385 electric trains.

The redevelopment project also gave a boost to the local economy with 70 percent of its budget being spent with suppliers within a 40-mile radius of the station.

“The extended and electrified platforms at Glasgow Queen Street help to make sure our railway is ready to play a role in combatting the challenge of climate change and its impact on how we live and work in the future,” Alex Hynes, the managing director of Scotland’s Railway, said.

Glasgow prepares to host the UN Climate Change Conference of the Parties (COP26) where the HydroFlex train will make its debut to highlight the essential role rail is playing for transport decarbonisation and innovation.