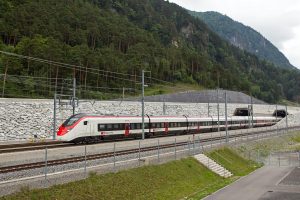 The Railway Agency of the European Union (ERA) authorised the new high-speed train Smile from Stadler, called Giruno by SBB, to run in double traction in Italy.
Following the approval, the Giruno train can run in double traction at 200 km per hour in Italy, as provided for in the cooperation agreement between SBB and Trenitalia.

The Giruno is the first multiple unit train to be granted European approval by the ERA to be used in both countries. Until mid-2019, this required an individual national approval by the Agenzia Nazionale per la Sicurezza delle Ferrovie (ANSF). In April 2019, the Giruno was approved for single traction in Switzerland, followed by double traction in May.

In the next few months Stadler will obtain approval for the individual vehicles and, together with SBB and Trenitalia, will make the Giruno ready for the planned Italian service. This also includes measures to improve the technical maturity and reliability in operation, in particular the signalling supplier’s ETCS system.
The 11-car Smile multi-system multiple unit train has a length of 202 metres and can travel at speeds of up to 250 km/h. It exceeds the requirements of the German law on equal opportunities for the disabled and has around twice as many wheelchair-accessible seats and toilets as specified. The Giruno offers comfortable seating for up to 810 passengers in double traction.

The Gotthard Base tunnel has been in operation since the end of 2016. With the completion of the 15.4-km-long Ceneri Base tunnel, the flat track through the Alps will be completed. In December 2020, the tunnel will be officially opened.

In 2014, SBB ordered 29 high-speed multiple-unit trains from Stadler with options for up to 92 additional trains.
In May 2019, the first commercial journey between Zurich station and Erstfeld took place. It was then used regularly on individual routes in Switzerland to gain operational experience on the home network before entering regular passenger service on 15 December 2019. <