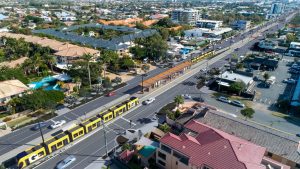 John Holland Group, the constructor of the third stage of the Gold Coast LRT project (GCLR3), awarded GE Power Conversion a contract to deliver electrification systems for the new line.

The 750V DC traction substations have been designed by the Australian engineering team and include GE Power Conversion electrification systems, including switchgear, transformers, rectifiers, circuit breakers and isolators that will be incorporated into the fabricated buildings for supply to site.

In April, John Holland was awarded the contract to build the new light rail extension.

Gold Coast LRT project Stage 3 covers the construction of a 6.7 km extension south from Broadbeach South to Burleigh Heads. The new LRT will be served by 8 stations and will be operated by 5 additional light rail vehicles. According to the estimations, the trams will deliver a 16-minute journey along the extension providing connections across the southern part of the Gold Coast covering Miami Beach, Nobby’s Beach, Mermaid Beach and Burleigh Heads.

Construction of the third stage is set to support up to 760 jobs and will help the Gold Coast manage expected population growth in coming decades.