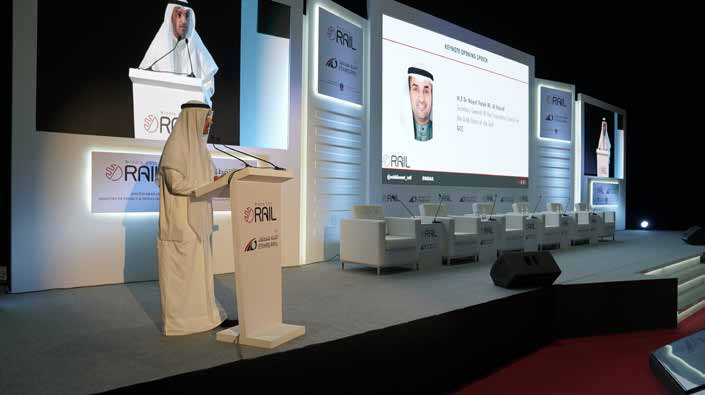 The GCC states are tackling climate change and, even if some of them are not on track to reach the zero emissions target by 2050, they intend to reach this goal in 2060. The energy sector needs
transformation, but it is a phased one, as the overall economic character of the region is oil-based, and a slower transition is needed than in Western countries. Proposed actions by states include moving towards a circular economy and pursuing plans for a diversified economy to introduce renewable energy on a large scale. It is not only this sector that needs to be transformed, but also the transport system, which focuses mainly on road transport, which needs to be shifted to sustainable transport modes. Rail transport development is a region-wide plan, with each state addressing these investments to ensure national, interstate and GCC connectivity to succeed in shifting some transportation to rail. The 2030 strategies call for two states to expand the network and allocate massive investment, while in other states the plans are slowly taking shape but are focused on urban rail transport.

The economy of the six-state Gulf Cooperation Council (GCC) region made up of Bahrain, Kuwait, Oman, Qatar, Saudi Arabia, and the United Arab Emirates is expected to grow by 5.9% in 2022, a recovery that will continue in the medium term driven by the hydrocarbon and nonhydrocarbon sectors. States are committed to achieving zero carbon emissions, with the UAE expecting to reach this goal in 2050, and Saudi Arabia and Brahrain’s economies will also operate under this concept by 2060. Importantly, these three countries are the three largest economies in the MENA region and account for 13% of total global oil production, which calls for increasing economic diversification and regional energy generation based on biofuels.

Shortly before COP26 in Glasgow, Saudi Arabia announced that its zero emissions target for 2060 was standing and that it would invest over USD 186 billion to develop a green economy and achieve a 50% share of renewable energy in the energy mix. The Kingdom of Saudi Arabia announced the Saudi Green Initiative with a first phase of 60 measures proposed in 2021 with investments of SAR 700 billion (USD 187 billion) to develop a green economy. By adhering to the Global Methane Pledge, which aims for a 30% reduction in global methane emissions by 2030, the KSA is placing itself at the forefront of reducing emissions by addressing energy efficiency programmes, developing and implementing carbon capture technology, increasing the share of public transport and renewable energy capacity. Through five initiatives, KSA will contribute to reducing carbon emissions by more than 278 million tonnes per year.

The response of the United Arab Emirates to climate change is a global one – that is, to become zero-emission by 2050, and the first country in the MENA region to achieve this goal in three decades. More than USD 163 billion will be invested in renewable energy production, one of the main pillars of green policy. Fifteen years ago, the UAE started to initiate clean energy projects investing over USD 40 billion. Climate plans aim to manage GHG emissions and thus support economic growth, increase climate resilience by minimising risks and optimising adaptive capacity, and further economic diversification through the introduction of new technology and innovative solutions, which will translate including through investment in nonoil sectors with significant growth potential. Bahrain is also committed to reducing emissions by 30% by 2035 through the introduction of sustainable technology and tree planting, as well as adopting a circular economy, including carbon capture technology. 22 already set initiatives will contribute to reducing energy consumption by 6% by 2025 and three initiatives will contribute to the country’s renewable energy target of 5% by 2025 and 10% by 2035. Bahrain’s energy sector accounts for 70% of total GHG emissions and through new initiatives and investments the level of emissions is expected to gradually reduce.