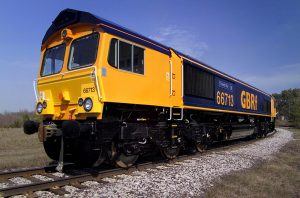 GB Railfreight and Lineas have signed a two-year extension to a contract to operate the railway freight services from Antwerp in Belgium to Irvine in Scotland until December 2021.

The partnership agreement marks a 5-year relationship with Lineas for this ‘hook and haul’ flow.

“Our relationship with GB Railfreight is one we are extremely proud of and is the greatest example of the importance of cross-border cooperation. We couldn’t be happier with the service GBRf provide on the UK side and this contract extension is proof of that. We look forward to continuing this successful partnership in the years ahead,” Geraldine Leyman, Senior Key Account Manager at Lineas said.

The service has so far averaged around 30 trains a year and will continue to run approximately between two and three times per month.

The trains, which arrive in Calais from the Lineas Rail operation, will consist of 20 ICA tank rail wagons and will carry 1200 tonnes of product per train. It will be transporting kaolin clay for the process of whitening paper which is produced at the UPM Caledonian Papermill in South Western Scotland.

GB Railfreight will normally collect the product on a Tuesday night, run through the channel tunnel with Electric Traction. A Class 66 Loco then hauls through to UPM Irvine to arrive at around 7pm on the Wednesday night. Following unloading, GB Railfreight will return the empty set of wagons back to the Channel Tunnel by Friday night for a path back to Calais.

The British rail operator is currently operating the intermodal services to and from the three largest ports in the UK.

The Antwerp to Irvine operation builds on the company’s existing intermodal services which is currently being managed by Julie Garn. This follows other European Traffic flows that GBRf have operated in the past.

“This service will be the longest term of operation for running services through the Channel Tunnel for GBRf, something we are extremely proud of. In addition, the shift to rail freight is a vital part of decarbonising our transport system. Our partnership with LINEAS shows our commitment to doing our part to reach the ambitious target of net zero emissions by 2050 and we hope to build on this going forward,” John Smith, Managing Director of GB Railfreight, said.