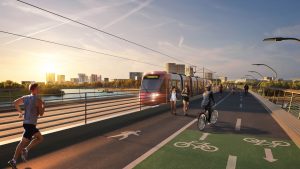 The New South Wales Government has provided AUD 50 million (USD 37.7 million) for planning and development works of the Parramatta LRT stage 2 in the upcoming 2021 – 2022 budget.

The funding will be used for initial investigations, as well as on the development progress of the project’s Environmental Impact Statement.

“This continues our record investment in public transport infrastructure, which is continuing to support thousands of jobs in our economy while also making Sydney and NSW a better place to live. This money will go towards planning, utilities, and geotechnical investigations. It will also progress the development of the project’s Environmental Impact Statement,” Treasurer Dominic Perrottet said when announced the financial commitment.

Major construction of the AUD 2.4 billion (USD 1.8 billion) Parramatta light Rail stage 1 is underway, and by the end of this month, 50 per cent of the tracks will be laid. The first phase will connect Westmead to Carlingford via the Parramatta CBD and Camellia and is expected to commence operations in 2023.