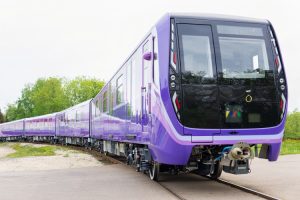 Metrovagonmash Plant has delivered four metro trains for Baku metro network as part of the contract signed in October 2019 for the supply of 12 five-car trainsets. All trains will be handed over to Baku Metro by 2023.

The barrier free metro trains are designed with special places for passengers with limited mobility as well as platforms for strollers and bicycles.

The 81-765.4B/-766.4B series metro trains for Baku have wider doors than the original trainsets which accelerate the boarding and disembarking of passengers.

A new light warning system to indicate the door opening and closing doors is used. A special colour scheme has been developed for Baku Metro, with LED lighting being automatically changing depending on the time of the day –cold light in the morning and relaxing warm in the evening.

The headlight design was modified, and the passenger information system was adapted to local conditions. The new trains are equipped with USB sockets for charging electronic devices and other gadgets.

The train is fitted with air conditioning and ventilation systems and the air disinfection installed systems are using UV lamps which providing additional protection against the spread of viral and bacterial infections, including COVID-19.

Metrowagonmash and Baku Metro are collaborating since 1967. The Russian manufacturer has delivered over 300 metro cars for Azerbaijan capital metro. The trainsets were produced at the plant in Mytishi, in Moscow Oblast.

In February 2019, the two companies have signed a contract for the supply of 6 five-car metro trains. In 2018, Metrowagonmash delivered two 81-765/766 metro trains.