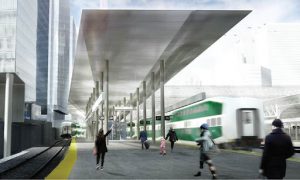 Infrastructure Ontario has announced that four consortia have been shortlisted for the Toronto Union Station enhancement project.

OnTrack Alliance, GTA Transit Alliance, OneUnion Alliance, and Union Gateway Alliance were invited to respond to the request for proposals in February 2020.

The technical and commercial submissions were received in May 2020 and the collaborative and behavioural assessments were conducted over the months of July and September 2020.

The winner of the contract will be announced this fall.

Union Station is the major transit hub in the city of Toronto. The project involves the modernisation of the infrastructure as well as the construction of two new tracks, designed to allow for future passenger train speed up to 72 km/h, with associated signaling works. It will also include the construction of a new platform and a new concourse area below the new platform that will connect the York, Bay and Via Concourse, Union Square and the Scotiabank Galleria and both York and Bay Streets. This will help to accommodate increased capacity as part of the planned expansion of GO Transit rail service.

The Toronto Union Station development is part of the GO rail expansion programme that will change the transport system in the Greater Toronto and Hamilton Area over the next decade.

Metrolinx will transform the GO Transit rail network into a system that will deliver two-way, all-day service every 15 minutes over core segments of the GO rail network. System-wide infrastructure upgrades will include the construction of new tracks and the electrification of the lines, the expansion of the stations, the procurement of new locomotives and train control systems to enable more frequent service.

The network development programme includes the construction of 205 km of tracks, and the electrification of 687 km of lines, the upgrade of 42 stations and 14 rail bridges. Six new maintenance and storage facilities will be also built.