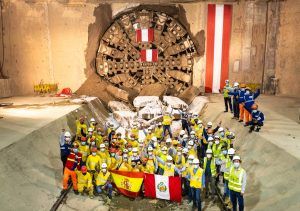 Lima Metro Line 2 project reached a milestone as the Delia TBM completed the excavation of the first 720m section of a tunnel that will connect San Juan de Dios and Circunvalación stations in the district of San Luis.
The President of Peru Pedro Castillo and the Transport Minister Juan Silvahas attended the event held at the Circunvalación station, in the district of San Luis.
The project, which Webuild is building in consortium with local and European partners, is part of a contract in which the civil works are worth USD 3 billion.

The works include the excavation of a 27 km tunnel to connect the Callao districts, and the construction of a section of another planned metro line called Line 4.

The metro section will be operated by five 6-car trains with a total capacity of up to 200 passengers per car. “With capacity at 100 percent, each train will be able to transport 1,200 passengers. People will have a faster commute, increasing their productivity and improving their income. The social impact of this project is very important,” the President said.

The excavation work will start for the second 736m section of the tunnel from the Circunvalación station to the Nicolás Ayllón bus stop in El Agustino. “We are going to continue managing and supporting [the project] so that this line will be put into service for as soon as possible,” the minister said.

The two metro lines will improve mobility across the city, one of the most congested in the world. They will allow for the transport of more than 1 million people a day through 10 districts, reducing commuting times between ATE and Callao from two hours 45 minutes to only 45 minutes.

When completed, the Lima Metro Line 2 will be 27 km long with 27 stations crossing 10 districts and providing interconnection with the Line 1 and Line 3 as well as to the bus system (the El Metropolitano). The line is expected to be completed in 2024.