The first new S-Bahn Berlin train started the operation on the S47 line on 1st January 2021 with ten pre-series trains expected to enter service this month.

The premiere six-car train, with serial numbers 484-001 and 483-001 rolled of the Schöneweide station running the new S-Bahn train on line S47 to Spindlersfeld. On the first day of January, two more new trains supplemented the service on the route between Spindlersfeld and Hermannstrasse.

“Our passengers can look forward to a completely new travel experience -a gliding on rails. These are the most comfortable trains in the long history of the Berlin S-Bahn,” S-Bahn CEO Peter Buchner said.

The trains provide a stream of further data and experience that can flow into the series production.

The new trains provide more space, large panoramic windows, and are adapted to the passengers with reduced mobility, offering fingertip service access for wheelchair users. They are equipped with air conditioning system, security cameras in all cars, modern passenger information displays and direct voice connections with the security center.

The new S-Bahn Berlin train is manufactured by Stadler and Siemens Mobility consortium under a contract awarded by S-Bahn Berlin in 2015 for the supply of 21 two-car and 85 four-car trains (382 cars). The remaining trains will be delivered by the end of 2023 and will be also deployed on the Ringbahn system (S41, S42) and on the S46 and S8 lines.

“More modern S-Bahn carriageswill follow in the coming years and makeit easier for passengers to switch to public transport. This will accelerate climate protection and the change in modes of transport,” Regine Günther, Senator for Environment, Transport and Climate Protection said. 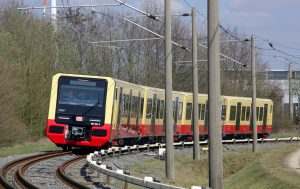 The new trains successfully passed a two-year test phase. From 2018 to spring 2020 they were extensively tested at the world’s largest test center for rail vehicles, the Siemens Mobility Test and Validation Center (PCW) in Wegberg-Wildenrath, in the state of North Rhine-Westphalia. The tests included measurements and type tests for derailment safety, brake tests to measure braking distances, and tests for electromagnetic compatibility (EMC). A four-car train underwent a 12-weekclimate testing programme at the Rail Tec Arsenal (RTA) in Vienna in the fall of 2019.

The pre-series trains have been tested thoroughly in the S-Bahn Berlin network since September 2019, completing around 150,000 test kilometers and operating on every part of the 340-kilometer system.

In October 2020, the Federal Railway Authority has approved the trains to enter passenger transport services.