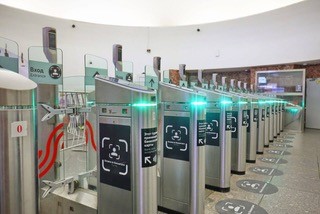 “Prospekt Mira station is the first metro station where the Face Pay can be used at any turnstile. Here, Moscow Metro employees and passengers make more than 3,000 Face Pay passes every day. The upgrade will help people enter the station even faster during rush hour,” Maksim Liksutov, the Deputy Mayor of Moscow for Transport said.

According to a survey 88% of the of those interviewed appreciate the advantages of the Face Pay biometric fare payment technology and prefer this system to other payment methods. Among the benefits of the new system, the users emphasised the importance of not necessary to use bank cards, the innovative solution which contributes to the digitalisation of transport services as well as time saving as they do not need to stand in line to ticket offices or vending machines.

According to the authorities, the storage of all the payment data of the Face Pay users is handled exclusively by a Russian bank and card transactions are processed through the NSPK national payment system, to which the Russian acquiring bank VTB is also connected.

In addition, all servers are located exclusively in Russia and the entire complex system is under the full control of the Government of Moscow and it cannot be disconnected from abroad.

In July, Moscow announced that the system was installed on six turnstiles at Prospekt Mira station (Line 6) and five at Komsomolskaya station (the Circle Line), 76 additional Face Pay turnstiles being installed. The plans underline that after the upgrade of turnstiles at metro stations, least 200 more turnstiles will be able to accept biometric payment.

In addition, as part of the Metro without Queues project, the Moscow Metro increased the capacity of the entrances of eight metro stations by installing additional turnstiles, opening additional entrances and allowing passengers to enter via exit gates. As a result, for instance, the capacity of the northern entrance of the CSKA station on Big Circle Line increased by 40% per hour which sharply reduced the queues in the rush hour.

“We have launched the Metro without Queues programme, so that in the morning and evening rush hours passengers could pass through the turnstiles faster. Our measures have already helped to unload the lobbies of eight metro stations. The first surveys showed that passengers liked our solutions. We will apply this individual approach at other stations, if necessary,” Maksim Liksutov added.

The Moscow Metro ticketing system has been recognised internationally several times. For two years in a row, it has received the prestigious Transport Ticketing Award (2020, 2021). In October 2021, the Moscow Metro was the first in the world to introduce facial recognition payment service at all metro stations.