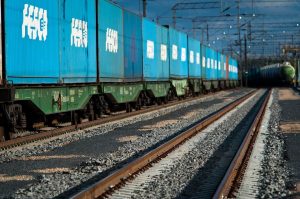 The intermodal transport pilot was carried out at the beginning of September from the Port of Ningbo in China through the Port of Vladivostok in Russia which then traveled by rail through the territory of Russia towards the Kolyadichi station in Belarus.

For Russia, this is the first digital transit service for China-Europe intermodal container transport arranged by the three companies.

As part of the project, the information systems of the Russian Railways and FESCO were integrated, enabling not only transit declaration and shipping documents to be transferred to the carrier in electronic form, but also bill of lading to be sent to stations of Belarus in the electronic format as well.

The Intertran project has been implemented throughout the Russian Railways network. FESCO has already sent more than 6 000 containers in import traffic using this technology.

The service reduced the time required for processing freight documents by four days. It was the use of solely electronic transport documents, transit declarations and electronic customs clearance that made it possible.

The positive effects of the Intertran project were particularly evident during the COVID-19 pandemic, because digital processing reduced physical contacts during transport to a minimum.

The Intertran project was introduced at the 5th Eastern Economic Forum in September 2019. The technology helped to reduce the time required for cargo clearance by four days, to 21 hours, using only electronic shipping documents and transit declarations and organising digital interaction with customs authorities. The electronic system is designed to develop intermodal transport in Eurasia, to reduce paperwork, and accelerate interactions between all parties in the transport process. These shipments are being carried out on a regular basis from Japan, China, and South Korea.