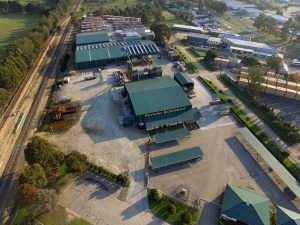 Victoria’s Minister for Ports and Freight Melissa Horne has announced that a test train arrived at the Fenning Intermodal Freight Terminal (FIFT) in Bairnsdale, East Gippsland, Victoria, for the first time since rail freight to Bairnsdale ceased in 2009.

The milestone comes as part of stage one the FIFT site, which is a purpose-built dedicated intermodal freight terminal, to make rail freight more efficient for producers and businesses.

“The trains servicing this terminal will travel on tracks currently being upgraded to deliver faster speeds and higher payloads, providing better connections as a much-needed boost to the local economy,” Melissa Horne said.

The site will also see significant development in the future, including the expansion of the freight terminal with increased warehouse capacity and storage facilities. In 2021, Fenning Timbers received a AUD 700,000 (USD 489,720) grant for the first stage of the Fenning Intermodal Freight Terminal built at the end of the Gippsland rail line.

The first stage of the project covers the upgrade of the rail siding, the infrastructure and the improvement of refuelling system, parking and access while the second one includes the construction of additional warehousing and storage facilities.

The Victorian Budget 2022/23 will deliver AUD 181 million (USD 126.6 million) for critical maintenance works on the regional rail freight network to improve rail freight competitiveness and support the growing freight task that is vital to regional economies and supply chains. In addition, a further AUD 3.5 million (USD 2.45 million) has been allocated to extend the Mode Shift Incentive Scheme (MSIS) which supports more than 170 freight industry jobs at intermodal terminals in regional Victoria and removes the equivalent of 28,000 truck trips from the state’s roads every year.