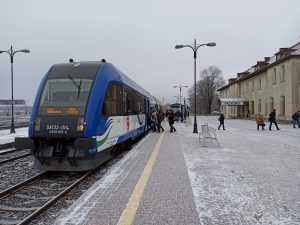 PKP Polish Railway Lines signed the first reconstruction and electrification contract for the 100 km Ełk – Korsze rail route, a project which will be implemented in several stages.

The contractor will be responsible for the works along the 49 km long section which includes track modernisation, electrification and the replacement of the railway traffic control devices. Two collision-free intersections in Giżycko and Wydminy will be constructed, while and 59 engineering structures (bridges, viaducts and culverts) and 23 existing rail crossings will be reconstructed.

Under the contract, the new platforms will be equipped with benches, shelters and passenger information systems, and the brightly lit objects will be adapted to the needs of people with reduced mobility. The platforms will be higher, which will make getting on and off the trains more comfortable. The level of passenger service at 3 stations and 2 stops will be considerably improved.

The works are planned for 2021 – 2024 and when completed, the travel time between Ełk and Giżycko will be reduced by 50 minutes.

“The railway investments implemented by the government are long awaited by the inhabitants. They also contribute to the improvement of agglomeration and inter-voivodeship transport. Thanks to the modernisation of the railway lines, stations and stops, we are striving to achieve the goal of safe, comfortable and predictable Polish railways” Andrzej Adamczyk, the Minister of Infrastructure said.

The modernisation and electrification of Ełk – Korsze rail route will be implemented under the 2021 – 2027 financial perspective. The project has been submitted under the European Union from the Operational Program Infrastructure and Environment and the European co-financing worth PLN 499 million (EUR 108.5 million). Recently, PKP PLK has signed a contract for the modernisation of Ełk station which in the future will play as a connection of Rail Baltica in Poland.

“The European Green Deal relies on railways. Therefore, investments in the development and modernisation of railways in Poland remain one of the main priorities of Poland’s support under the European Funds,” said Christopher Todd, Head of Unit, Programmes and projects in Poland, Directorate General for Regional and Urban Policy, European Commission.