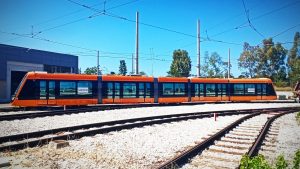 The Greek Minister of Transport, Costas Karamanlis, attended to a reception at Elliniko depot where Alstom handed over the first two of the 25 Citadis X05 trams for Athens.

They are part of a EUR 54 million contract awarded by Attiko Metro, the public transport authority in July 2018. The delivery of the last tram is expected by the end of May 2021.

“It is our duty to contribute to a more sustainable and green mobility in the city of Athens. We know how important it is for everyone to have the latest generation trams for improved, eco-friendly and more pleasant urban transport” Attiko Metro CEO Nikos Kouretas said.

The tram will enter dynamic tests at the end of September before being put into passenger service in February 2021.

In addition to the manufacturing and supply of the trams, Alstom is also responsible for the on-site testing, training and warranty services, as well as spare parts for the vehicles.

The Citadis X05, the latest version of the Citadis range, are equipped with permanent magnet motors for higher efficiency, optimised HVAC, which together reduce its energy consumption by 25%. Simplified sub-system integration and maintenance decrease lifecycle costs, while the tramway is 97% recyclable.

The five-section trams will be 33 metres long, with a capacity of 294 passengers, of which 54 seated. The double doors along the entire length of the tramway ensure enhanced accessibility.

“It is our strategic choice to invest in public transport, to invest in new trams. Especially in this difficult time, it is important to offer citizens another modern travel option,” the minister said.

The modern Citadis X05 trams will supplement the existing fleet of light rail vehicles for use on the network in Athens and Piraeus. All 25 trams will run on the city’s existing network, as well as on any planned extensions including the 5.4 km extensions between the two cities served by 12 new stops. These include a 3.1 km tram line extension to Piraeus and a 2.3 km extension from Piraeus.

The Citadis X05 trams for Athens are Alstom’s first light rail vehicles sold in Greece, after the company provided 28 metro trains in early 2000 for the first Athens Metro project.