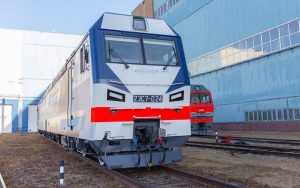 Silkway Transit received from Sinara Transport Machines Holding the first three 2ES7 Black Granite electric locomotives and by the end of December, another batch of eight locomotives will be delivered.

The two-section AC electric locomotives were presented during a ceremony which took place on November 18, in the city of Nur-Sultan, Kazakhstan.

Before entering commercial operation on the main lines of Kazakhstan, each 2ES7 locomotive will undergo an additional trial operation procedure, including 3,000 km of linear run. This optional condition was included in the contract at the request of Silkway Transit. The electric locomotives will be used on the heavily loaded sections of Karaganda – Nur-Sultan – Pavlodar and Shekment – Alma-Ata.

25 drivers from Kazakhstan took a special training course at the Ural Locomotives to organise successful trouble-free run of electric locomotives equipped with the modern high-tech equipment.

In October, Silkway Transit, the first private railway operator in Kazakhstan, ordered 22 2ES7 Black Granite locomotives manufactured at the Ural Locomotives plant which will be delivered by the end of 2022.

“The 2ES7 electric locomotives are one of our advanced developments and we are exporting them for the first time. I hope that Black Granites will be able to satisfy all the business goals of our partners and I believe that this delivery will be the first step in our further long-term mutually beneficial cooperation,” Dmitry Pumpyansky, the President of Sinara Group said.

The delivery is part of STM’s largest export contract and will improve country’s rail competitiveness. “Considering that the bulk of the Kazakhstan locomotive fleet is represented by worn-out equipment, its renewal is a fundamental factor in development of the railway industry. Today we witness a rapid development of the freight market. Quality and safety of the provided services become the main priorities,” Daniyar Abulgazin, Member of Presidium of the National Chamber of Entrepreneurs of the Republic of Kazakhstan “Atameken” said.

The Black Granite electric locomotives are designed to provide heavy traffic on AC railway lines in the CIS countries. They are equipped with AC traction drive providing high traction force. The locomotives can carry trains with a total weight of up to 9,000 tonnes with maximum power of an electric locomotive of 8.8 MW. Another feature of this rolling stock model range is that 2ES7 can overcome limiting ascents and long descents. This provision is essential for Kazakhstan considering the geographic conditions of the country and the territory where its railway lies. Moreover, the application of 2ES7 may potentially increase the throughput of their mainline traffic.