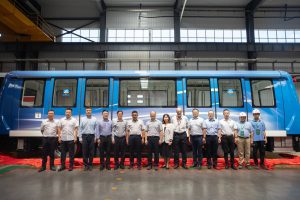 A delivery ceremony was held in the assembly area of its workshop, the customer toured the factory and was able to take the new APM train.

The delivery is part of a contract signed in 2019 to supply the automatic people mover vehicles, services and signalling systems for the airport’s APM system. EUR 28 million was the value of the contract awarded. Under which the joint venture was responsible for the upgrade of the existing 18 Innovia APM 100 cars and the supply of 9 additional Innovia APM 300 cars, including the Mitrac Train Control and Management System and Mitrac Propulsion equipment.

The signalling part of the contract covered upgrade works and other wayside equipment from Bombardier Cityflo 550 to Cityflo 650.

Facing with the challenge of COVID-19, the teams of BCIA and Alstom overcame the difficulties and worked together to push forward the project design, production and delivery, and completed the testing of train in early July 2021, which was ready for delivery. 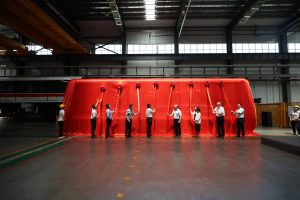 Beijing Capital International Airport, as China’s first gateway, is a large international airport with the most important geographical location, the largest scale, the most complete equipment and the busiest transport and production in China. The number of flights taking off and landing and the passenger throughput of the airport are in the leading position in the industry worldwide. In 2008, Alstom delivered Beijing Olympic designated project–Beijing Capital International Airport APM to welcome the Olympic Game.

The Innovia APM 300 system offers quick, comfortable and convenient service for commuters within cities, to and from airports or between airport terminals. It provides smooth ride quality and minimised interior and exterior noise with low overall capital and lifecycle costs.