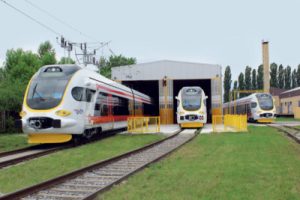 The European Investment Bank is assessing Croatia rolling stock procurement project which has a cost of EUR 150 million of which EUR 21 million would be provided by the bank. Recently, the state-owned rail passenger transport operator has secured loans of EUR 57.9 million from Eurofima and IBRD for the procurement of 12 trainsets manufactured by Koncar Electric Vehicles.

The project comprises of the acquisition of 21 EMUs of which 11 trainsets for suburban services and 10 for regional traffic. They will be designed to run at speeds of 160 km/h.

The trains will be purchased by HŽPP, the national railway passenger transport operator. The public procurement for the 21 EMUs was launched in 2019. By this acquisition, HŽPP expects a reduction in operational costs through the greater efficiency.

The regional trains will have three to four doors while the EMUs to be put into operation on urban and suburban railway network will have six to eight doors, enabling rapid entry and exit of passengers. The single-deck low-floor trains will be designed to improve the accessibility of passengers, including for ones with disabilities. To improve levels of comfort, both the passenger cars and the driver’s cab will be equipped with air conditioning systems.

The steering and diagnostic systems are controlled by a microprocessor system that links the train subsystems with modern communication protocols. This makes it possible to link up to three trains into one. All the new EMUs will be equipped with the ERTMS Level 2.

The new fleet will enter transport services on the Zapresic – Zabok and Dugo Selo – Krizevci railway routes which are currently being modernised.

The total investment for the procurement of the 21 EMUs is EUR 175.32 million with a EUR 119.28 million contribution from the Cohesion Fund through the “Competitiveness and Cohesion” Operational Programme for the 2014-2020 programming period.

Croatia rolling stock procurement project is part of country’s strategy to modernise the railway transport and to increase its market share by increasing the competitiveness of passenger services.

HŽPP has already started the modernisation of its fleet. At the end of 2016, HŽPP into commercial operation 22 electric trains including two prototypes and one DMU.

Currently, Koncar Electric Vehicles is manufacturing a batch of 12 EMUs for HZPP. For the procurement of the 11 new EMUs, Eurofima announced in May a EUR 57.2 million funding with a maturity of 15 years. One Koncar – made train has received a EUR 5.2 million loan from the International Bank for Reconstruction and Development (IBRD), the Ministry of Transport announced in April.

The new electric trains will be able to run at 160 km/h and will be equipped with wheelchair ramps for entry and exit and storage space for bicycles. The trains will feature a modern heating and cooling system and video surveillance, and free internet access (WiFi) will be provided for passengers.

In 2014, HZPP and Koncar Electric Vehicles signed a contract for the supply of 44 trains. Between 2015 and 2016, 20 EMUs were delivered for urban, suburban and regional transport, while one DMU was delivered for regional traffic, all these trains being funded by a loan from the Croatian Bank for Reconstruction and Development.

From November 2019 to March 2020 four more DMUs were delivered, which were financed by IBRD.

According to HZPP 2020-2022 financial plan, the contract with Koncar Electric Vehicles will be implemented by the delivery of another batch of 7 DMUs scheduled to enter operation from 2021 to 2024.