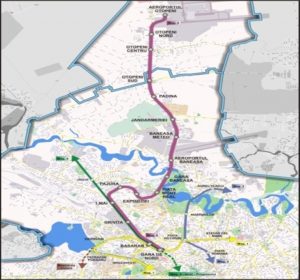 Romania’s Ministry of Transport and Metrorex, the Bucharest metro operator, have signed the financing agreement for the city’s airport metro connection – the Line 6. The project is expected to be completed by November 2026.

Under the agreement, the new metro project will benefit European financing through the 2014-2020 Large Infrastructure Operational Programme (LIOP) under the first Axis – Improving mobility through the development of the TEN-T and the metro network which has a total allotted investment of EUR 3.4 billion.

The financing contract signed between the two institutions has a total value of EUR 1.3 billion funding (RON 6.3 billion), of which EUR 572.6 million (RON 2.8 billion) is the eligible cost. EUR 486.76 million is the grant value provided by the Cohesion Fund through the LIOP, which covers 85% of the approved eligible cost.

For Bucharest airport metro connection, a JPY 41.87 billion (EUR 340.5 million in 2020 prices) loan agreement was signed with the Japan International Cooperation Agency (JICA), ratified by the Government in 2010. JPY 6.96 billion (EUR 56.65 million) of the loan was provided for the consultancy services, covering the entire costs, while JPY 33.24 billion (EUR 270.37 million) was allotted for the civil construction.

A RON 289.2 million (EUR 59.65 million) consultancy contract was signed with the consortium of Padeco (leader), Oriental Consultants Global and Metroul.

The Line 6 will be constructed between the existing 1 Mai station, on Line 4, and the Henri Coanda International Airport. It will have a length of 14.2 km served by 12 stations with a transport capacity of 50,000 passengers per hour per direction.

The Line 6 will facilitate the public transport services between the airport, the central station and the city’s centre, and will enhance the transport connections in the north part of Romania’s capital. It will also optimise the passengers’ comfort, will provide fast transport services and will reduce traffic congestion along the entire corridor.

In 2019, Metrorex, the metro operator, has announced that intends to invest EUR 6.5 billion for the modernisation and development of the metro system. In September, the authorities have inaugurated the first section of Line 5 for which Alstom will deliver the new metro trains.