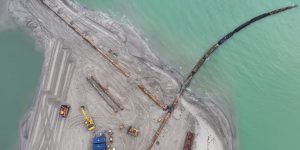 The construction of the Fehmarnbelt fixed link has been launched on 1 January 2021 with a physical ceremony being held at the harbour in Rødbyhavn on Lolland and a virtual officially opening. The harbour is being built by the Dutch consortium, Fehmarn Belt Contractors (FBC), and is expected to be completed by the end of 2021.

It is a “very special event. Although circumstances prevent us from being present, at the groundbreaking ceremony in Rødby, we are able to celebrate virtually. When completed in 2029, the Fehmarnbelt fixed link will be a green connection used by Eco-friendly vehicles and significant volumes of freight will be moved from road to rail. This link will bring Europe closer together and so the start of the construction is indeed a major milestone,” Benny Engelbrecht, the Danish Minister of Transport, said.

“Finally things are getting underway. Only two months after the green light from our Federal Administrative Court, we can now finally start the works on this mega-project. We will now start the manufacturing of the tunnel elements for the Fehmarnbelt fixed link. I am happy that we are cooperating so closely with our Danish friends and with Schleswig – Holstein because this project is a huge opportunity for Europe. We want to move quickly now. Normally, I would be on site right now, but times are different,” Andreas Scheuer, the German Federal Minister of Transport and Digital Infrastructure said.

Femern A/S, the company responsible for the project implementation, has initiated the contracts with Femern Link Contractors (FLC) with effect from 1 January 2021, which means that the construction of the tunnel element factory as well as the portals and ramps can begin on the Danish side.

The Transport Minister of Schleswig – Holstein Bernd Buchholz held the ceremony at Great Plön Lake, not far from the Fehmarnbelt fixed link. “November marked a significant stage for the project with plan approval granted for the construction of the link on German territory. The construction can now finally begin! First on the Danish side and then, not much later, in Germany. We look forward for improved transport links not only between Denmark and Germany, but also between Scandinavia and Central Europe.

The Fehmarnbelt was approved in Denmark through the Danish Parliament’s adoption of the Construction Act in 2015. On 3 November 2020, The Federal Administrative Court rejected all complaints against the plan approval decision. Thus, the highest administrative court in Germany gave the go-ahead for construction of the German part of the Fehmarnbelt tunnel.

“Is gratified after so many years of planning and anticipation to see the Fehmarnbelt project finally getting underway. This will deliver the connectivity and mobility at a grand new scale with state-of-the-art road and rail infrastructure. Linking Scandinavia to Germany and further South to the Mediterranean. For the EU, this is a TEN-T flagship strategic project filling a missing and vital cross border link,” Pat Cox, the coordinator of the Scandinavian-Mediterranean Corridor said.

The Fehmarnbelt link will be an 18 km long immersed road and rail tunnel comprising a four lane motorway and two electrified rail tracks. The project has been estimated at DKK 52.6 billion (EUR 7 billion).