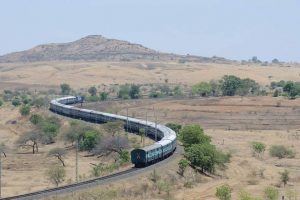 Russian Railways has completed the feasibility study for the modernisation of the India’s Nagpur–Secunderabad line with a length of 581 km. Under the project, reconstruction works will be performed.

The project aim is to increase passenger train speed to up to 200 km/h, from currently 56 km/h, which will reduce travel time from 10 to 4 hours.

Within the framework of the project, RZD International has proposed to the Indian colleagues advanced Russian and international technical solutions regarding reconstruction of the track, bridges, as well as the catenary and traction substations, signalling and traffic safety systems.

The agreement between RZD and India’s Ministry of Railways was signed in 2017 and was completed at the end of 2019, according with the agreed work schedule.

The line, which comprises two main sections, Nagpur-Ballarshah and the Ballarshah-Secunderabad, has 1770 bridges and culverts 18 major bridges with a length of more than 100 meters.

The plans to reconstruct and modernise the lines to allow the increase of trains’ speed were announced by India’s government in 2014. Besides this line, India also selected Delhi-Chandigarh, Chennai-Hyderabad and Delhi-Lucknow-Varanasi railway lines.