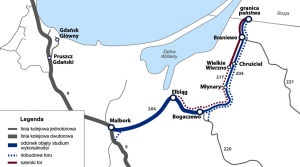 PKP Polskie Linie Kolejowe and Databout signed a feasibility study contract for the reconstruction of the Braniewo-Malbork rail section to increase the rail freight transport from Braniewo and Kaliningrad Oblast to the Tri-City ports. Under the PLN 3.74 million (EUR 831,131) contract, the study is expected to be delivered in the first quarter of 2023.

The study will be the basis for detailed project planning after 2023.

The feasibility study concerns the reconstruction of the railway line No. 204 on a section of 90 km between the Kaliningrad Oblast, Braniewo, Bogaczew and Malbork. It will be important to adapt the lines to the requirements of TEN-T corridors.

As part of the feasibility study, the Databout will perform a comprehensive analysis, determine the technical possibilities and detailed solutions and the scope of necessary works, as well as the estimated investment costs. The conditions for freight and passenger transport at speeds of up to 160 km/h will be analyzed.

The analysis will include the construction of a 40-km additional track between Bogaczewo and Braniewo which will allow for driving on two tracks on the entire route Malbork – Braniewo, improving the capacity of the line. The plans also provide for the possibility of electrifying the line between Bogaczewo and Braniewo, increasing the importance of railways as an ecological means of transporting goods.

The study will also consider the possibility to create a rail access to Elbląg, a main sea harbour of Poland.The construction of the link in the vicinity of Malbork will allow for efficient passage of trains from Iława towards Elbląg without the need to change the direction of travel.The construction of the junction in Bogaczewo may enable driving from Braniewo and Chruściel to Olsztyn.

The plans are to explore the possibility for a broad-gauge railway line connection between Poland and Kaliningrad as the existing 1520mm link ends in the village of Wielkie Wierzno. Databout will analyse the possibility of extending the section to Bogaczewo or Elbląg.As part of the investment, it is planned to adapt the broad-gauge line to heavier and longer trains up to 1050 meters.This will allow more goods to be transported between the Tri-City ports and Russia. 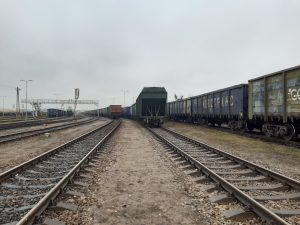 The Braniewo-Malbork line is an important rail connection to the Gdańsk and Gdynia ports.

“The contract for the line from Braniewo to Malbork is another step towards increasing the rail access to the ports of the Tri-City. We will be prepared for an investment that will improve the transport of goods between Poland and the Kaliningrad Oblast. Current and future investments of PKP Polskie Linie Kolejowe significantly increase the role of rail trnsport as an efficient and environmentally friendly means of transport,” Ireneusz Merchel, the CEO of PKP PLK said.

The planned investment will result in better conditions for the transport of goods, allowing heavier and longer trains to run on the line. The construction of the Braniewo Towarowe station, located between the state border and the Braniewo station, will improve the service of long freight trains.The facility will be adapted to the needs of customs and border control.