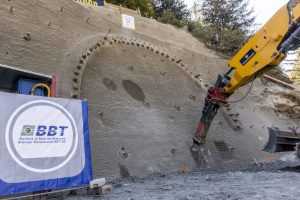 A symbolic start of excavation works for the future Brenner northern portal in the Sill Gorge near Innsbruck took place at the end of October.

The event was attended by the Deputy Governor of Tyrol Josef Geisler, the mayor of Innsbruck Georg Willi, the abbot of the Wilten monastery, Giuseppe Romeo, representing the Italian railway company RFI, Christian Wieser and Gerfried Neurauter representing the Austrian railways (ÖBB), as well as BBT SE CEOs Martin Gradnitzer and Gilberto Cardola.

The new rail link will connect the Brenner Base Tunnel to the Central Station in Innsbruck.

The excavation works started in the western main tunnel tube and will move southwards. The blessing of the construction works was given at the very spot where the future northern portal of the Brenner Base Tunnel will stand. Two 140-m long excavations southwards starting from the Sill Gorge construction lot will be driven for the route.

“If we look at mobility and traffic conditions in Tyrol and beyond, it is high time to build sustainable infrastructures. Everybody talks about climate change, but we are actually taking action: together we are building the Brenner Base Tunnel, Europe’s biggest mobility project,” Josef Geisler, deputy Governor of Tyrol said at the ceremony.

The Brenner northern portal at the foot of the Viller Berg mountain in the heart of the Sill Gorge will be a visible entry and exit point, to and from the longest underground railway connection in the world. The breakthrough of the southern portal to the Brenner Base Tunnel near Fortezza already took place in December 2018.

By the end of 2024, many other works will also be built in the Sill Gorge to connect the Brenner Base Tunnel to the Innsbruck Central Station. The roughly 600-metre long stretch will cost around EUR 64 million. Compared to the other construction sites in Austria, whose works are mostly underground, the works in this construction site are largely performed above ground.

Once the BBT is operational, freight trains will transit as well, the northern portal will mainly be used by passenger trains, because freight trains can use the Innsbruck by-pass. After passing through the portals in Tyrol and Alto Adige, railway traffic between Innsbruck and Fortezza will run through the two single-track tubes of the BBT for 55 km.