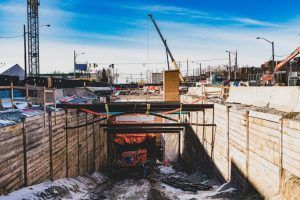 The excavation work has been completed for Finch West Station, one of the major stations along the Finch West LRT project that will serve as an interchange with the TTC metro system through the Line 1 in northwest Toronto.

Sixteen months of digging and hauling took to workers, excavators and heavy machinery to finish digging out the new Finch West LRT Station at Keele Street and Finch Avenue West.

Before the digging began, a lot of planning took place. The process began by clearing the area and setting up traffic control measures necessary due to heavy pedestrian and motor traffic at Finch Avenue West and Keele Street.

Once the coast was clear, heavy machinery was brought to the site, including pile drivers, different sizes of excavators, bulldozers, track loaders and bobcats.

Safety and logistical planning then took place with engineers overseeing the installation of deep piles and heavy crossover supporting structures as the dig progressed to ensure the enormous cavern would remain stable and safe for the workers inside.

As this work progressed, the machines and their operators worked together as a team to dig down and scrape out the contours of the station box, then deliver the dirt to a long-reach excavator which hauled it up to the surface.

“It was a mechanical chess match where dirt, grit, machinery and engineering meet to get the job done safely,” Roberto Fernandez, Mosaic construction manager, stations and stops said. Mosaic Transit Group is the winning bidder for the construction of Finch West LRT under a CAD 2.5 billion (USD 1.96 billion) contract awarded in 2018.

With excavation complete, the team is moving forward with structural work to build up the station, including pouring concrete to install the walls and concourse slabs.

The Finch West LRT project covers the construction of a 11 km long LRT between Humber College and the new Finch West station on the Toronto-York Spadina metro extension. Under the project, 18 stations will be built of which 16 surface stops as well as a below-grade terminus stop at Humber College, and an underground interchange station at the TTC’s Finch West metro Station. A new maintenance and storage facility for the light rail vehicles will be also constructed.