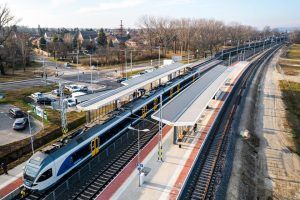 The European Commission has approved a EUR 80 million investment from the Cohesion Fund for the modernisation of Szajol – Debrecen railway which will improve train connections for passenger and freight transport in the region of Northern Great Plain in Hungary.

The funds will modernise railway section between Ebes and Debrecen where three rail-road intersections will be removed, and a road overpass will be built, and the track will be upgraded to carry heavier loads. Between Szajol and Debrecen a new signalling and control infrastructure and new overhead electric cables will be installed.

“We launch another important major project to concretely improve the life of citizens on the ground. The modernisation of the railway lines in Hungary will ensure a better train connection for citizens and businesses in the region, but also for the freight transport across Europe in line with the Green Deal priorities of the Commission,” the Commissioner for Cohesion and Reforms, Elisa Ferreira, said.

The project on the entire line from Szajol to Debrecen is implemented into two phases. The first one covering the reconstruction of the Szajol-Püspökladány section was completed in 2015 while the Ebes – Debrecen section including the Debrecen station is part of the second stage.

On the section between Szajol and Ebes, with a length of 100 km, 5 electronic station and interlocking devices and the ETCS Level 2 are currently installed by a consortium of Thales Austria and Thales Rail Signallig Solutions. A HUF 12.9 billion (EUR 33.6 million) contract was awarded which is expected to be completed in December 2022. On the Ebes – Debrecen rail section the works cover the modernisation of the line and the construction of the second track to allow the increase of the axle load to 22.5 tonnes and trains to run at 160 km/h. Upgrading the overhead line system, the construction of a road overpass and the installation of the power cable and line cable along the section are also part of the project worth HUF 15.1 billion (EUR 39.5 million).

Szajol – Debrecen railway is part of the Szajol – Záhon mainline to the Ukrainian border which has received European funding for the elaboration of studies on the rehabilitation the entire line to allow trains to run at 160 km/h.