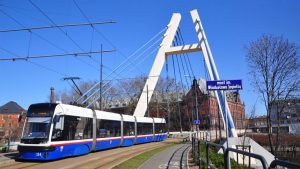 The European Commission has approved, through the Cohesion Fund a EUR 199 million funding for the modernisation of four railway lines and the tram network in two cities. EUR 341.3 million is the total value of the projects which have received the European financing.

EUR 85 million through the ERDF will fund the extension of the Olsztyn tram and bus routes and installing an intelligent transport system. EUR 122.45 million is the total value of the project.

The project envisages the procurement of six tramways and the construction of a 12.3 km tram line and 16.6 km bus route, creating a total of 28.9 km of public transport routes. It is estimated that 5.7million passenger trips per year will be made on the new and upgraded public transport infrastructure.

The project also includes the procurement and installation of a passenger information system, ticket sale and ticket validation machines, and information and promotional activities.

The project aims to improve connections between the Olsztyn centre, its south-eastern suburbs, and its railway and bus stations. A better-integrated transport system will make it easier to switch between various modes of transport, resulting in faster commutes.

The project is expected to be completed in April 2023.

The city of Bydgoszcz has received EUR 38.66 million Cohesion funding for the procurement of new trams and the modernisation of the existing lines. EUR 86.6 million is the total value of the project which is expected to be completed in 2021.

The project comprises the construction of 2.2 km of double-track line along Kujawska Street between the Bernardyńskie and Kujawskie roundabouts.  Nearby roads will be reconstructed and extended and a new dual carriageway with a separate bus lane will be built. The modernisation of 1.9 km of double-track line along Wojska Polskiego Street is also planned. Both sections of track will be connected to the city’s intelligent transport system.

In addition, 15 new low-floor trams, 29-32 m-long and 2.3-2.4m wide, are to be purchased. Designed for a track gauge of 1000mm, they will be able to carry at least 200 passengers each and will have passenger information systems. The project also includes the construction of 8 tram stops and building or rebuilding pavements, pedestrian crossings, bus bays and bicycle paths and a park-and-ride facility with 134 parking spaces will be built at Kujawskie.

The main objective of the project is to improve public transport in Bydgoszcz by extending the tram network, boosting its performance and enhancing its attractiveness. Passenger comfort will be increased, as will accessibility, especially for people with reduced mobility and visual and hearing impairments.

For the revitalisation of railway lines in Śląskieleads, EUR 76 million were provided by the ERDF. Under the EUR 132.3 million funding, four railway lines in Śląskie region will be upgraded, allowing modern trains which will improve freight and passenger services. The works cover a total length of 52 km of line that is currently in a technically inadequate condition.

This investment lies on a route from the Upper Silesian conurbation, which has 2.2 million inhabitants, and the Silesian Beskid mountains is an important destination for tourists.

When work is completed, passenger trains will again be able to run between Goleszów and Cieszyn. No trains have run on this section since 2009. Restoration of this service will greatly benefit the region’s residents and improve links to the Czech border. he project will also contribute to improving rail services between central Silesia and the areas of Cieszyn and Wisła/Ustron.