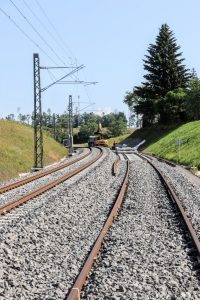 The European Commission has approved a EUR 160 million investment from the Cohesion Fund for the Czech Republic to support the construction of Sudomerice u Tabora–Votice 17-km second track. This will enable the passage of long-distance, high-speed trains and more freight and regional trains.

“This project will modernise rail transport in Czechia making its railway network more competitive and attractive compared to other more polluting and dangerous transport modes. This will greatly benefit people and businesses not only in Czechia but also in the rest of Central Europe,” Elisa Ferreira, the Commissioner for Cohesion and Reforms, said.

The project involves the modernisation of the existing single track, track-doubling works on 20 km of line, the construction of one station and the construction of two tunnels totalling 1.5 km, an important construction component which will allow a considerable reduction of journey times from Praha to South Bohemia.

The Sudomerice u Tabora–Votice will lead mostly in a new route which will be by 2 km shorter. Train speed will increase up to 160 km/h which will assure shorter journey times between Prague and Tábor to one hour. This will be allowed by the two tunnels Mezno (840m) and Deboreč (660m). In February 2020, SZ announced the boring completion of Deboreč Tunnel.

In March 2018, the railway infrastructure manager, SZ and OHL ŽS signed the works contract. The constructed started in May 2018 and the completion of the whole modernisation of the single-track section on the border of South Bohemia and Central Bohemia Region is expected in 2021.

CZK 7.16 billion (EUR 272.8 million) is the total value of the project. the project has been submitted for co-financing approval by the European Union under the Operational Programme Transport 2014–2020 from European Structural and Investment Funds up to an amount of CZK 5 billion (EUR 193.86 million). The national financing is assured by the State Fund for Transport Infrastructure.

The modernisation of the line Sudoměřice –Votice is one of the final section to be modernised on the Czech Rail Transit Corridor IV which connects Germany and Austria through Děčín, Prague and České Budějovice.