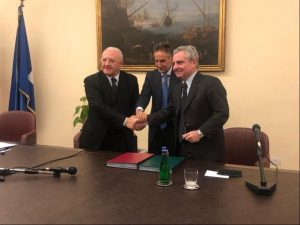 The Campania Region’s railway management authority, Ente Autonomo Volturno (EAV), and the European Investment Bank signed an agreement for the provision of a EUR 68 million loan for the procurement of new electric trains which will operate the Circumvesuviana network, in Naples province.

The EUR 220 million project envisages the acquisition of 40 electric trains that have reached the end of their useful life. They will enter commercial services on the six lines of the Circumvesuviana, which serve one of the most densely populated areas in Europe, comprising 47 municipalities with around 2.5 million inhabitants. The busiest line is the Naples-Sorrento line which, besides being a commuter line, also serves a large number of tourist destinations and cultural heritage sites such as Herculaneum and Pompeii.

“The revival of EAV continues. We are proud that, following its historic financial recovery, our company is the first public transport company in southern Italy to sign an agreement with the EIB under the Juncker Plan. Thanks to regional funds EAV has already started acquiring more rolling stock, and this loan will give it the impetus to continue doing so in order to provide our fellow citizens with an even better, more modern service,” said the President of the Campania Region, Vincenzo De Luca.

In the last three years, EAV payed debts of around EUR 700 million. In 2016-2018, the company generated EUR 90 million operating profits, compared to losses of EUR 330 million for the period 2012-2015. The net equity increased from EUR 10 million to EUR 152 million, Chairman of EAV, Umberto De Gregorio, explained, which has concluded that by this investment and the EIB loan, the company enters a “new era”. 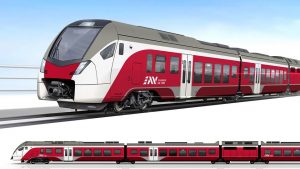 In May, Ferrovie Nord Milano (FNM) ordered from Stadler five new Flirt diesel-electric trains, which will be transferred to Ente Autonomo Volturno (EAV) to operate the Piedimonte Matese – Naples rail route. the contract, which also includes maintenance services, is the first option under the framework agreement signed in November 2018 between FNM and Stadler for up to 50 trains. The contract for the five new trains had a value of EUR 35 million. The 3-car trains have a length of 66.8m, with 168 seats. They are able to operate at a maximum speed of 140km/h.