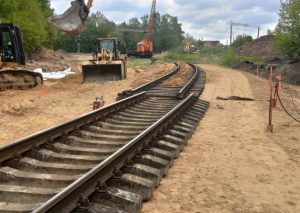 The contractors will construct the Kaunas – Panevėžys railway and engineering buildings on the line as well as the longest railway bridge in the Baltic States spanning the Neris river near Jonava.

These Rail Baltica tenders will be organised within two stages. ‘In the first, construction companies matching qualification requirements will be selected, and in the second stage, the selected companies will submit the specific proposals for individual construction objects and components,’ AB Lietuvos Geležinkelių Infrastruktūra director-general Karolis Sankovski said.

The railway embankment, engineering building and the road connection works are estimated at EUR 475 million, of which EUR 67 million would be the costs for the construction of the Neris river rridge. The EU will finance 85% of the total value, while the rest will be from Lithuania’s national budget.

Considering the scope of EU financing for the Rail Baltica railway line Kaunas – Lithuanian-Latvian state border, the limits of the technical projects being drafted, technological differences in work execution and in consideration of experience in implementing similar projects, the railway line construction works are split into four main purchase object groups for which separate contracts would be signed. They involve the railway embankment and engineering structures construction, the connecting road laying, the construction of a bridge over Neris River near Jonava city and upper railway structure installation works.

Competitions for railway embankment and engineering building construction, the Neris River bridge construction and upper railway structure installation will be launched first. During the qualification adherence competition, in parallel, technical requirements will be drafted for the second stage of the competition.

Based on a 2017 cost-benefit analysis and expert evaluation, the combined required financing for the construction of the railway line Kaunas – Lithuanian-Latvian state border is EUR 977 million, with the project being funded up to 85% from EU funds.

Qualification adherence competitions are soon to be also launched for the remaining fourth object group of the Rail Baltica railway line Kaunas – Lithuanian-Latvian state border, the laying of connecting roads.

By now, Lithuania has submitted an application to receive EU funding, with EUR 201 million to be allocated to the tender for contracting works.

Additional EUR 202 million EU funding was secured by Lithuania and under the actual MFF, the European financing must be used until 2023. Thus, there can be no delay, and in order to complete the project in time, we must begin executing the work as soon as possible,” Sankovski explained.