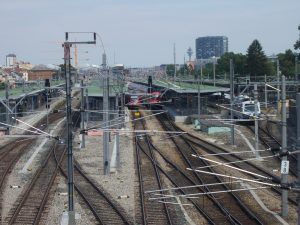 A EUR 2.4 billion investment for Vienna rail infrastructure has been agreed to improve and modernise the S-Bahn network in the city’s area by 2034.

The investment plan has been agreed by ÖBB, the Austrian Federal Ministry of Climate Action, Environment, Energy, Mobility, Innovation and Technology (BMK) and the City of Vienna to deliver environmentally friendly train services with an attractive local transport for citizens and the entire eastern region.

“With the expansion of the Vienna rail infrastructure and in the eastern region, we are making public transport even more attractive. Together with the KlimaTicket, a cheap offer for all public transport throughout Austria, we create the best conditions for commuting by train. This is an important contribution to more climate protection,” Climate Protection Minister Leonore Gewessler said.

This is the second investment package which includes a EUR 144 million financing from the City of Vienna, representing 22.43% of all measures directly relevant to local transport, which amount to EUR 642 million.

The plan’s centerpiece is to introduce the ETCS on the core section of S-Bahn network between Floridsdorf and Meidling which will enable trains to run every 2.5 minutes by 2027 when the digitalisation project will be completed. The infrastructure will be adapted so that modern and longer trains can be used. It will be also necessary to renew the railway systems between Floridsdorf and Meidling covering the track systems, signal boxes, retaining walls, bridges, viaducts, overhead lines, for long-term, reliable, low-maintenance operation.

The S-Bahn digital upgrade is the backbone of local public transport providing passengers increased reliability, quality and comfort. ÖBB CEO Andreas Matthä said that “the ‘digitized S-Bahn’ will enable more frequent and punctual intervals in the metro system” and passengers will choose to “take the S-Bahn instead of standing in traffic jams”.

The preliminary work for Meidling – Mödling four-track expansion will start in 2026 and will be completed on the Meidling-Liesing section between 2027 and 2032 and the Liesing-Mödling section will be completed in 2034. The plan also includes the construction of new station at Benyastraße between Atzgersdorf and Hetzendorf, as well as in Lower Austria in the Brunn Europaring area. Combined with the modernised Vienna S-Bahn main route, the project will enable more frequent intervals for attractive local transport to a 5-minute express train interval between Meidling and Liesing and a 10-minute express train interval between Liesing and Mödling.

With the completion of the two-track Pottendorf line, a second efficient connection between Vienna and Wiener Neustadt was created and the conurbations in between were linked to the federal capital.The City of Vienna is involved in creating an optimal traffic solution for the Pottendorfer Strasse level crossing, which is to be closed as part of the project.

The rail development plans also include the double track expansion of the Hütteldorf train station between Hütteldorf and Penzing including a new station at Baumgarten on the S45 line. In the future, it will be possible to increase the frequency to 7.5 minutes on the suburban line. The S80 line will be upgraded to allow trains to run at every 15 minutes. A second reversing track will be built in Aspern Nord in 2023, and the main construction work on the connecting line, which part of the first rail infrastructure package, will start in 2024.

“We already have an exemplary modal split of 74:26 in Vienna. This means that almost three quarters of the Viennese population use public transport, cycle or walk. And we want to significantly increase this share in the future. We are therefore constantly investing in the expansion of public transport. And the expansion and further attractiveness of local rail transport is also an indispensable prerequisite for this,” mayor of Vienna, Michael Ludwig said.