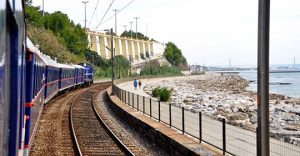 Portugal has received a EUR 50 million financing from the Cohesion Fund for Cascais railway line modernisation project which received the funding under the Sustainability and Efficiency in the Use of Resources OP (POSEUR) covering the entire Portuguese territory.

Under the project, the 25-km line between Lisbon and Cascais will be modernised, including the installation of new electrical infrastructure, signalling and control systems aiming at making train journeys safer and more energy efficient.

Under the project, a LP 10 catenary system implementation prepared for the 25 kV AC will be constructed, together with an electric traction substation in Sete Rios. The project will also includes the deployment of ETCS Level 2.

The project, which will be developed by Infraestruturas de Portugal, has a total value of EUR 77 million, with a national financial support of EUR 27 million.

When completed at the end of 2023, the modernisation of the electrification system will reduce the energy consumption by half.

“The Lisbon-Cascais line is the second-busiest on the national railway network. By making it safer and more  efficient, we aim at encouraging the shift from car to public transport for tens of thousands of people commuting to Lisbon every day and consequently reduce traffic congestion and pollution for a healthier, cleaner urban environment,” Commissioner for Cohesion and Reforms, Elisa Ferreira, said.

The project is part of the Ferrovia 2020, the national railway strategy. When it will enter services, the line will meet the transport demand and will boost the economic development within Lisbon region, and it will also be integrated into the multimodal transport system proividing more attractive and connected transport services.

Cascais railway line modernisation project was submitted under the POSEUR as it is part of the energy efficiency of public transport programme as the investment contributes to the promotion of a sustainable urban mobility enabling energy consumption and CO2 reduction.