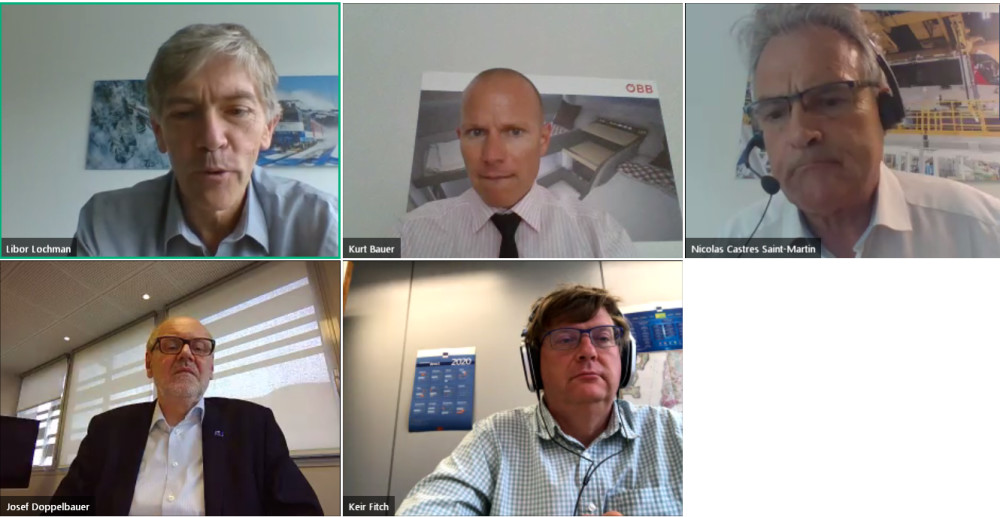 The rail sector, which was represented at the webinar by over 200 attendees, faces the distinct possibility of significant financial losses and unprecedented service disruption in the coming months and years. In response, Keir Fitch, Head of Unit (Rail Safety & Interoperability), DG MOVE, European Commission (EC)and Josef Doppelbauer, Executive Director of the EU Agency for Railways offered a variety of recovery measures, addressing both urgent regulatory issues and the long-term legislative agenda.

The European Union’s headline announcement was the extension, from 16 June 2020 to 31 October 2020, of the Fourth Railway Package technical transposition deadline for member states. Mr Fitch and Dr Doppelbauer detailed additional interventions to streamline authorisation processes, such as the prolongation of the validity of safety certificates, of certificates for entities in charge of maintenance, and of drivers’ licenses. The recovery package also includes increased funding through a reinforced long-term budget for the period 2021-2027.

In spite of the recent and often severe impacts on sector business, there was a palpable sense of optimism for the future of rail demonstrated in audience polls: 75% of the audience thought that rail’s share of the mobility market would increase or remain the same as pre-COVID levels, and 60%predicted rail would enjoy a larger portion of the freight market.

Mr Bauer agreed that rail could soon enjoy a more prominent position in the transport landscape, provided that the short-term challenges of viability during social distancing, or the loss of custom to private cars, were overcome. Mr Castres Saint-Martin said that Alstom were focused on product innovations in answer to market evolutions, and that technological research was key to success. Mr Fitch specified thatmore automation and digitalisation could drive down costs and boost competitiveness.

Looking further ahead, speakers cited environmental sustainability and the European Green Deal as the most vital concern and opportunity for the rail sector’s future.

Dr Doppelbauer saw the end of the COVID-19 lockdown as a “golden opportunity to establish rail as the most relevant transport mode in the European Union”. The EU’s ‘Renaissance of Rail Investment’ package was officially announced for the first time during the webinar. A leaked document reported by Euractiv had previously quoted that €40 billion* had been earmarked for the package, which will help shift passengers and freight to rail and create jobs through modernisation initiatives.The package forms part of the EU’s green recovery plan. “For distances up to 800km, intra-EU flights may become redundant,” Dr Doppelbauer said, referring to rail’s green credentials. Mr Bauer, responsible for ÖBB’s Nightjet overnight train services, supported the idea that the migration of passengers from planes to trains could continue with suitable targeted policies. Mr Fitch concluded that rail had the great potential to help meet climate change objectives, and the audience concurred that boosting the European Green Deal should be the priority for EU rail policymakers after the lockdown.

An on demand video of the debate and further information on the IRS Rail Webinar series are available at https://www.irits.org/rail-webinars/.

*The original version of this press release suggested that the amount of €40 billion had also been officially announced during the webinar. This is not the case, and the text has now been corrected.

The IRS Rail Webinar series builds on the network, knowledge, and trust established over 9 International Railway Summit events. Throughout the series influential policymakers, key operators and infrastructure owners, and pioneering suppliers and innovators will share their experience and best practice. IRS Rail Webinars are designed to help the railway sector stay informed and stay connected. At this difficult time communication is more important than ever.

International Railway Summit provides a ‘matchmaking’ service between rail industry leaders (‘buyers’) and technical experts, based on buyer delegates’ project requirements and the proven expertise of large and small suppliers that we have carefully handpicked. Based on this matchmaking, buyer delegates attend one-to-one consultation sessions with suitable suppliers during the annual summit.

In addition to the one-to-one meetings, delegates also attend a conference programme given by key industry leaders and experts and network over lunches and dinners with their counterparts and industry colleagues from all over the world. The International Railway Summit is hosted by IRITS Events. The 10th International Railway Summit will take place on 24-26 February 2021 in Berlin, Germany.