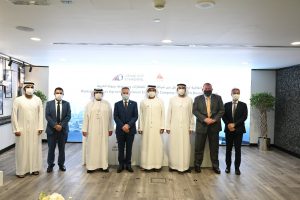 The transport of building materials will be ensured by 643 train trips annually. Each train will be 1 km – long, hauling 70 wagons with a total capacity of 7,000 tonnes. This translates into a reduction of 120,000 truck trips each year.

“Our partnership will see the Group benefit from our advanced rail freight infrastructure, transporting construction materials from the company’s facilities,” Etihad Rail says.

This year, Etihad Rai also signed a contract to provide Stevin Rock rail freight transport services from Ras Al Khaimah, the northernmost emirate of the UAE, to Abu Dhabi. The UAE rail operator will transport 3.5 million tonnes per year of raw materials from Stevin Rock’s Al Ghail quarry in Ras Al Khaimah to Abu Dhabi, through 500 annual train trips. The agreement will have significant environmental benefits, with an annual reduction of 100,000 truck trips.

Both commercial partnerships are of great importance for Etihad Rail being agreed for the Stage Two of the UAE railway network.

The second stage covers the construction of 605 km of rail connections from Ghuweifat at the border with Saudi Arabia to Fujairah on the east coast. The network will connect the Emirates via Abu Dhabi, KIZAD, Khalifa Port, Jebel Ali Port, Dubai, Sharjah, Ras al-Khaimah and Fujairah on the East Coast, linking with the existing line at Ruwais, effectively uniting the major industrial ports and trading centres of the country.

At the beginning of 2021, Etihad Rail announced the tracklaying works for the Al Ruwais – Ghuweifat rail line which are being performed by a joint venture comprising China State Construction Engineering Corporation and South Korea’s SK Engineering and Construction. The work is part of the Package A contract worth AED 1.5 billion (USD 408.4 million) which was signed in 2019. Under the contract, the winner is responsible for the design and construction of rail infrastructure for 139 km of rail line. It includes earth works, the construction of the bridges, tunnels, crossings, and tracklaying works and the creation of the railway link with the first phase of the network.