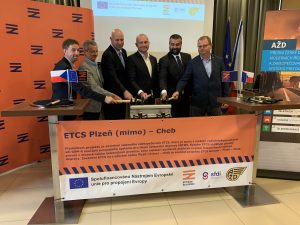 The Czech railway infrastructure manager, SZ, has started the ETCS installation on the 107 km railway line from Pilsen to Cheb, part of the third transit railway corridor from Prague to the west of Bohemia.

Under the project, a new station interlocking equipment at the Cheb station will be built.

The first construction work was started at the end of 2019 and it will be completed in August 2022.

The construction of the radio block centre (RBC) for the section between Pilsen and Cheb was the first to start last year. Balises will be installed on the tracks of each railway station and in all inter-station sections in January and February next year. Prior to this, modifications will be made to the existing station interlocking equipment and line signalling system, which will ensure the transmission of data on the unoccupied sections, the condition of routes, level crossings and other information to the radio block centre.

Under the second phase of the ETCS installation project, the existing relay interlocking equipment in Cheb will be replaced by electronic 3rd category equipment with control from a single service worksite with the possibility of control from the Traffic Control Centre in Prague. The necessary track modifications and partial reconstructions of the station interlocking equipment are already underway as part of the ongoing modernisation of the entire station.

At Cheb station, the works also include some modifications of the telecommunication equipment, the passenger radio and the information and camera system. The modifications are planned to be performed in the station building for the location of a new interlocking unit, the rooms for telecommunication equipment and the provision of space for its functioning, as well as a new arrangement of traffic control worksites.

On the Czech railway infrastructure, the ETCS covers 255 km of lines. Another 206 km between Břeclav and Petrovice u Karviné have already entered trial operation. The Přerov – Česká Třebová and Český Brod – Praha-Běchovice – Praha-Uhříněves are the other two railway sections which will operate with ETCS by the end of 2020.

The ETCS project from Plzeň to Cheb is performed by AŽD Praha. The action is part of the Beroun – Plzeň – Cheb ETCS project which has received EUR 27.14 million funding from the EU through the CEF. The total cost of the project is estimated at EUR 38.6 million (CZK 1 billion) with a EU contribution of EUR 22.5 million (CZK 584.8 million).

The investment action is based on the ERTMS/ETCS European Deployment Plan and the National Implementation Plan.