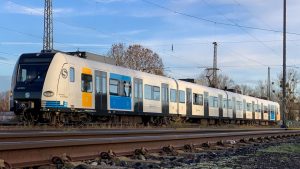 Part of the rail project known as Stuttgart 21, the contract will see Alstom retrofit the BR 423 and BR 430 trains operating in the greater Stuttgart area’s S-Bahn and conventional railway lines.

The contract also includes the delivery of the series equipment and the supervision of the installation of a further 58 BR 423 and 151 BR 430 series vehicles.

As early as January 2025, the retrofitted Stuttgart S-Bahn trains will operate on the first lines to be equipped with ETCS Level 2. At the end of 2025, ETCS Level 2 operation with ATO GoA 2 will begin on the S-Bahn main line. Once complete, the frequency of service will be increased.

“By equipping the vehicles with the latest signalling technology and the innovation partnership with Deutsche Bahn, we are jointly making a decisive contribution to the implementation of the Stuttgart 21 lighthouse project and the digitalisation of German rail transport,” said Michael Konias, Head of Digital & Integrated Systems at Alstom for Germany, Austria and Switzerland.

When equipped with the latest ETCS signalling technology, the traction units will begin entering service in 2025, in time for the launch of the Stuttgart Digital Node, Germany’s first digitalised rail hub for all train categories. A contractual agreement for the future upgrade to the next ETCS Technical Specifications for Interoperability standards has already been agreed for 2026 – 27. In addition, the two companies are also cooperating to develop and implement further signalling technologies to continue driving the urban rail digital revolution taking place in Germany.

Together with DB, Alstom will also carry out work and define the minimum requirements for signalling technology so that the implementation of the European-defined ETCS/ATO standard can take place for the large-scale rollout in Germany.