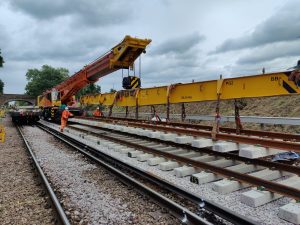 Network Rail will be rebuilding a crucial section of West Sussex railway next year, including a nine day period when there will be no trains at all through Horsham.

Due to the construction works, between 14 and 22 August 2021, no trains will run along much of the Arun Valley line, from Arundel to Three Bridges including Horsham and Crawley, and the Mole Valley line between Horsham and Dorking. Additionally, there will be two weekends of engineering closures during the end of July 2021.

The project includes the replacement of 1980s track and infrastructure, with new, more reliable equipment that will improve journeys for customers on the two routes, as well as the wider region by reducing delays.

The British railway infrastructure manager says that the closures have been carefully planned for the summer holidays, when passenger numbers are lower and some people may be able to be more flexible with their travel plans or take holiday. The work has been timed to avoid disrupting Brighton Pride 2021 at the start of August.

Services on longer distance coastal journeys to Chichester, Littlehampton, Bognor Regis and Portsmouth will still be running, but journeys will take longer.

The project on West Sussex railway infrastructure involves the complete renewal of 9 sets of old switches and crossings, the movable sections of track that guide trains from one track to another and allow them to cross paths. The existing equipment has been in place since the 1980s, is old and unreliable and needs to be replaced. The new equipment will reduce faults and delays to passengers. A section of rail, sleepers and ballast will be renewed, and track drainage replaced at Horsham station. The upgraded track will give passengers smoother, more reliable journeys, while the drainage improvements will maintain track quality for the long-term.

£8.5 million (EUR 9.4 million) will be invested to replace the track and infrastructure with modern equipment.

The project also includes the upgrade of Parsonage Road level crossing to a full barrier CCTV crossing to improve safety, and recontrol of Littlehaven signal box to the Three Bridges Rail Operating Centre (ROC) in March 2022.

“This investment was originally planned for several bank holiday closures, supported by a long series of weekend closures over two to three years. By doing the work over nine consecutive days and two weekends, the overall disruption to passengers can be significantly reduced, while fast-tracking the delivery of the reliability, safety and capacity benefits of the project,” Network Rail Southern Region Investment Director Paul Harwood said.

Next year Network Rail will closely work with Southern, Thameslink and South Western Railway to ensure passengers are aware of the changes to their journeys while alternative options are to be provided to keep passengers moving.