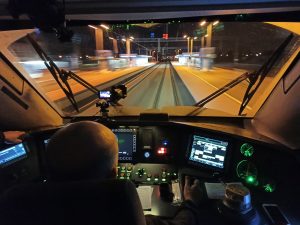 PKP Polskie Linie Kolejowe performed a test train at 200 km/h on the Warsaw-Gdańsk railway line on January 11. A special-equipped with ERTMS/ECTS Level 2 Pendolino train tested for the first time the system functionality on the railway line linking the two important Polish cities, part of the E65 international corridor.

PKP PLK says that the test on the route confirmed that driving at 200 km/h is possible, safe and comfortable. This means that the trip on the Warsaw – Gdynia rail connection will be shorter from mid-2020, providing additional capacity.

The specialists of the Railway Research Institute have checked the proper operation of the ERTMS L2 system. Andrzej Bittel, the Secretary of State at the Ministry of Infrastructure was on the train while tests were performed.

The test was made to verify the system’s functionality and to check the interaction between the rolling stock and trackside equipment.

Measurements and tests were performed on an ongoing basis using the installed sensors, transmitters, receivers and recorders. The collected results will allow PKP PLK to obtain the required certificates for the 200 km/h operation. As part of the ERTMS Level 2 deployment, over 4,100 sensors were installed on the track, the so-called balises, which verify and report the location and train speeds in real time.

Higher speed is not the only effect of the ERTMS Level 2 as the system is also increasing the level of safety. The track devices are sending signals and information to the train equipped with onboard computer about changes on the route. The information, together with the data on the conditions of the journey, speed limit and location of other t 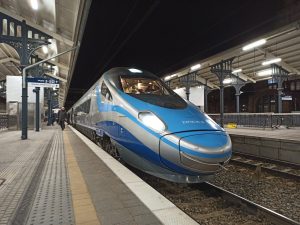 rains is sent directly to the driver’s desk. In addition, the system provides the relevant information to support the task of the train drive and gives the driver all the necessary information to operate with cab signalling. If the warnings are ignored, the system will automatically adjust the train speed to the conditions.

The system is supervised by the dispatch system in Warsaw and Gdańsk. 54 radio masts were built along the route, which allow signals from 8 local control centres to be sent to trains via the GSM-R radio communication system.
The project on the modernisation of the E65 / C-E65 railway line on the Warsaw – Gdynia section for ERTMS/ETCS deployment phase II had a total investment of PLN 928 million (EUR 219.2 million) and is co-financed by the EU under the Operational Programme Infrastructure and Environment (OPI&E) for 2007-2013 and 2014-2020.