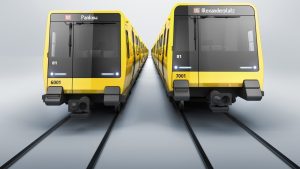 This is the company’s first order for entrance and HVAC systems in the metro segment in conjunction with Stadler Deutschland.

The deliveries for the initial order are expected to commence in the last quarter of 2021, with the final shipments to be made by the end of 2026.

“In terms of both its size and its relevance, this order represents a huge success for our company and is the largest and longest-term order Knorr-Bremse has received from Stadler to date,” Jürgen Wilder, Member of the Executive Board of Knorr-Bremse AG and responsible for the Rail Vehicle Systems division said.

For the new Series J and JK vehicles, Knorr-Bremse will install the EP2002 mechatronic brake control system with an optimised version for Germany that goes by the new product family name CubeControl. As a result, Stadler and BVG will benefit from technology that is both extremely well tried and tested and at the same time right up to date. The previous generation of vehicles on the Berlin U-Bahn network, such as the Series IK fleet which entered service in 2015, already operate successfully with brake equipment from Knorr-Bremse.

The new cars will be equipped with the latest version of IFE’s Type RLS sliding plug door system, previous versions of which have already proven extremely reliable on the fleet of Berlin metro cars. These systems are equipped with advanced obstacle detection and LED lighting on the door leaves and facilitate rapid, safe and barrier-free boarding and alighting. The passenger compartments will also be equipped with modern heating and ventilation systems, while driver’s cabs will feature energy-efficient HVAC systems, all based on Merak’s extensive experience and proven, reliable components.

In March 2020, Stadler won the tender on the supply BVG 1,500 metro cars including the delivery of spare parts for a period of 32 years.