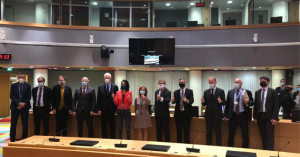 The European Parliament’s budget negotiators agreed with the Council Presidency on the outline of an agreement on the next Multiannual Financial Framework (2021-2027) and new Own Resources.

The deal will now be submitted to member states for endorsement together with the other elements of the next MFF and recovery package, including the general regime of conditionality for the protection of the Union budget, on which the Council presidency and the Parliament’s negotiators reached a provisional agreement on 5 November.

“We have reached a political agreement on the last details of the EU’s next long-term budget. This is a well-balanced deal, which addresses the issues raised by the Parliament while respecting the guidance received from the European Council in July,” Michael Clauß, Permanent Representative of Germany to the EU said.

The agreement has been reached after ten weeks of intense negotiations with the Parliament and the Commission that have been underway since the end of August. It complements the comprehensive financial package of EUR 1 824.3 billion negotiated by EU leaders in July, which combines the next Multiannual Financial Framework – EUR 1 074.3 billion – and a EUR 750 billion temporary recovery instrument, the Next Generation EU.

Following intensive consultations, the Parliament obtained EUR 16 billion on top of the package agreed by heads of state or government at their summit in July. EUR 15 billion will reinforce flagship programmes, to protect citizens from the COVID-19 pandemic, provide opportunities to the next generation, and preserve European values. EUR 1 billion will increase flexibility to address future needs and crises.

Parliament’s top priority was to secure an increase for flagship programmes – including Horizon Europe, EU4Health and Erasmus+, that were at risk of being underfinanced under the European Council’s July 2020 agreement, jeopardising the EU’s commitments and priorities, notably the Green Deal and the Digital Agenda.

The political package agreed by the Council and the Parliament includes more flexibility to allow the EU to respond to unforeseen needs, a legally binding roadmap for new own resources, and the repayments under the Next Generation EU will not reduce the money available for the EU programmes.

Negotiators agreed to the principle that the medium- to long-term costs of repaying the debt from the recovery fund should neither come at the expense of well-established investment programmes in the Multiannual Financial Framework, nor result in much higher GNI-based contributions from member states. The EP negotiators have devised a roadmap to introduce new Own Resources during the next seven years. The roadmap is incorporated into the ‘Interinstitutional Agreement’, a legally binding text. In addition to the plastics-based contribution as of 2021, the roadmap includes an ETS (Emissions Trading System)-based Own Resource, a digital levy, from 2023, and an FTT-based Own Resource as well as a financial contribution linked to the corporate sector or a new common corporate tax base.