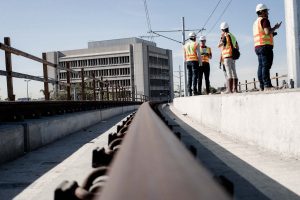 The light rail line will provide end-to-end trips which will take 30 minutes compared to bus trips that take at least 48 minutes currently.

The construction works are expected to start in 2022 could be built in phases depending on available funding. The project is partially funded by the Measure R and Measure M transport sales taxes approved by county voters in 2008 and 2016, respectively. USD 1.3 billion would be covered from these two measures.

The new line will become operational in 2028. According to the estimation, the new rail connection will exceed 30,000 daily trips by 2040.

Following the FEIS/R public review period, the Metro Board will consider the report as soon as the November/December timeframe. Once the board certifies the FEIS/R and if it approves the project, the Federal Transit Administration would then issue a Record of Decision for the project. Next year, the LA transport authority will launch a tender to select the construction contractor and will start the property acquisition process.

In 2018, the Metro Board has selected the preferred alternative for the transit corridor.

The East San Fernando Valley project is part of Metro’s 30-year transport strategy which has an estimated investment of USD 400 billion.