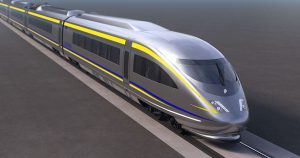 Starting April 24, the document is opened for public consultation.

“With the release of this first environmental document in Northern California, we are continuing to show progress on every mile of the statewide system,” Authority CEO Brian Kelly said.

“Now is the time to make investments that will connect all of California with sustainable transportation options. We want to see high-speed rail get to San Jose,” said Sam Liccardo, the Mayor of San José.

The approximately 145-km project extent will travel through or near the communities of Santa Clara, San Jose, Morgan Hill, Gilroy, and Los Banos. The project comprises high-speed rail system infrastructure, high-speed rail stations at San Jose Diridon and Gilroy, a maintenance of way facility either south or southeast of Gilroy, and a maintenance of way siding west of Turner Island Road in the Central Valley. Stations at San Jose Diridon and Gilroy would provide links with regional and local mass transit.

The final Report/Environmental Impact Statement (EIR/EIS) document for San Jose to Merced will be issued in 2021.

With the release of the draft environmental document for California HSR on the San Jose to Merced section, the authority remains on track to complete the environmental clearance for the full phase 1 system by the federally mandated 2022 deadline.