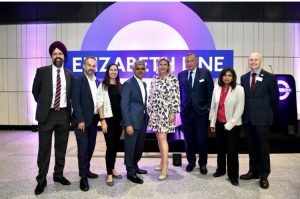 The Elizabeth Line has been opened to public on May 24, 2022, providing passengers seamless journeys through the heart of London, between Paddington and Abbey Wood.

“Today is an historic day as the Elizabeth line opens to passengers. This is a huge moment, not just for London but the entire country – particularly in this special Jubilee year. This brand new line is the most significant addition to our transport network in decades,” the Mayor of London said.

Her Majesty The Queen and His Royal Highness The Earl of Wessex, visited Paddington Elizabeth line station to mark the completion of the new railway last week.

Service starts with 12 trains an hour running between Paddington and Abbey Wood from Monday to Saturday. Work will continue outside those hours, on Sundays and select full weekends to allow for any testing and software updates to bring forward the next phase of the Elizabeth line to this autumn. The number of trains running through the central area and direct journeys from the east and west is expected to nearly double in autumn 2022. By May 2023, the separate sections of Elizabeth line are fully connected and services run to the final timetable and 24 trains an hour will run at the busiest times between Paddington and Whitechapel.

The new line will serve up to 200 million passengers each year providing reduced journey times across London and the South East.

Through the 9 new stations in central London, the 55 km railway line provides transport connection from Reading and Heathrow in the west, through central London, to Shenfield and Abbey Wood in the east. 31 of the 41 stations along the Elizabeth line route are on the surface rail network to the east and west.

The line is operated by the 70 Class 345 trains manufactured in Derby factory by Alstom which also was responsible for the technology and infrastructure. The 7- and 9-car Aventra trains will be also maintained for the next 32 years by Alstom at Old Oak Common depot in West London.

The Alstom-led ATC joint venture, formed with partners TSO and Costain, has designed, constructed, tested and commissioned critical infrastructure works for the new 55-km line. ATC has delivered the traction power supply for the trains, incorporating Alstom’s in-house feeding systems, non-traction power supplies for the stations, shafts and portals, tunnel ventilation systems and other electrical and mechanical systems, laid the track (including 5500 HAS sleepers), and built a new maintenance depot at Plumstead. ATC has been the principal contractor for the entire railway construction, managing safety, logistics, testing and commissioning between more than twenty interfacing contractors.