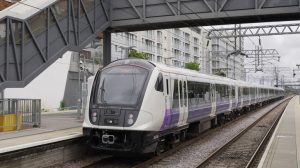 Crossrail Ltd has announced that the 21 km Elizabeth line crossing central London between Paddington and Abbey Wood will be ready to open in the first half of 2022 and is estimated to have an additional cost of  £450 million (EUR 503 million) to be completed.

The Elizabeth Line was initially expected to be opened in December 2019, but it was postponed several times with the latest schedule for the summer of 2021, which obviously was again delayed due to the Crossrail Ltd Board decision announced on August 21.

The latest cost estimate presented to the Board shows that the cost to complete the Crossrail project could be up to £1.1 billion (EUR 1.23 billion) above the financing package agreed in December 2018, with £450 million more than the upper end of the range announced in November 2019. Work is ongoing to finalise the cost estimates.

Crossrail is planning to start intensive operational testing, known as trial running, at the earliest opportunity in 2021. From the start of trial running it will then take a period of time to fully test the line before it can open for passenger service. This includes a final phase known as trial operations involving people being invited onto trains and stations to test real-time service scenarios to ensure the readiness of the railway.

Following the opening of the central section, full services across the Elizabeth line from Reading and Heathrow in the west to Abbey Wood and Shenfield in the east will be introduced. The introduction of full services will be aligned with the national rail timetable change which occurs twice a year in May and December.

According to Crossrail Ltd, the schedule delay is due to three main factors.

Despite the challenges presented by COVID-19, good progress continues to be made with completing the remaining construction works, with much of this work coming to an end along with software testing for the signalling and train systems. Progress during the last six months includes all central section stations, except Bond Street, now certified as ready to support trial running. The introduction of the first full-length Class 345 train in passenger service between Paddington and Heathrow and a viable signalling software product available for trial running.

To help recover some of the lost time, Crossrail is undertaking a period of intensive construction activity during August and September to complete the remaining construction works in the routeway for trial running.

Following completion of the blockade in September, Crossrail will commence testing of the next evolution of the signalling software, helping to further build operational reliability. Once software testing completes later this year, Crossrail will then begin an enabling phase for Trial Running with testing in the tunnels undertaken with an increased number of trains.