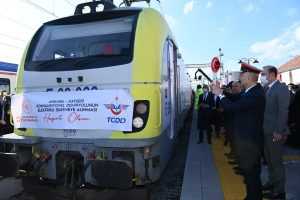 The electrification allows “trains coming from the west to be able to reach the south over the Boğazköprü junction,” Karaismailoğlu said.

372 km of catenary, 118 km of energy transmission lines and 6 transformer centres were built on the Ankara – Kayseri line.

“The electrification of Nenek-Şefaatli line, the trains from west will pass to the south via Kayseri and the trains departing from İzmir and Edirne will be able to go from Adana to Malatya on electrified tracks. The project contributes to the green development goals,” Metin Akbaş, the director general of TCDD said at the ceremony.

On the Ankara – Kayseri conventional railway line, Turkey is planning the construction of a double-track, electric line from Yerköy to Kayseri which will be allow trains to run at a speed of 200 km/h.

With this project, Turkey benefits a 5,931 km electrified rail network and in addition, works are performed to electrify other 847 km of rail sections across the country.

“The most important reform process of Turkish rail network represents the construction of new lines,” the minister said. In total, Turkey built 2,149 km of new conventional lines and 1,213 km high-speed rail connections since 2003.
TCDD is currently operating a 12,803-km railway network and all the lines build 50 years ago are overhauled and renewed. Ankara – Kayseri railway line was opened almost 100 years ago.
The railway lines equipped with signalling systems increased by 172% and the electrified lines by 180% increasing the efficiency and safety of railway transport.

4% of the population benefits access to the high-speed train services in 13 provinces with 44 destinations. To date, 69 million passengers have used high-speed transport services.

Turkey is currently constructing the 405 km Ankara-Sivas high-speed line which achieved a 95% physical progress as TCDD initiated the trials in February 2021. A test has been performed on the Balıseyh-Yerköy-Sivas section and construction works on the Ankara-Balıseyh section are ongoing. When the project is completed, the travel time between Ankara and Sivas will decrease from 12 hours to only 2 hours.

The 503.2 km Ankara-İzmir high-speed rail project has reached a 47% physical progress in the infrastructure works and when completed, the line will reduce the travel time by more than 10 hours, from 14 to 3.5 hours. It is expected that 13.5 million passengers and 90 million tones will use the new connection.

The infrastructure works on the 201km long Bursa-Yenişehir-Osmaneli high-speed line achieved an 82% progress and the 102 km Konya-Karaman line is expected to enter commercial services. In February, TCDD performed dynamic tests on the Konya – Karaman section part of the Konya-Karaman- Ulukışla connection which will allow passenger and freight train operation with a daily average of 34 trains per direction.

Recently, the Ministry of Infrastructure and China Machinery Engineering Corp (CMEC) signed a contract for Aksaray-Ulukışla-Mersin Yenice rail project with a total value of USD 1.8 billion. The 196 km double-track electrified line will be designed for a speed of 250 km/h. The Chinese company will be responsible for the supply and construction of communication, electricity, signalling and interaction systems. The rail infrastructure will be built in partnership with Turkish companies.

Today, 5,753 km representing 45% of the 12,803 km rail network has been electrified and with the completion of the ongoing electrification projects on the conventional lines, 50% of the existing lines will be electrified by 2023.

Turkey is committed to invest TRY 1.36 trillion (USD 81.78 billion) for rail infrastructure and by now has spent TRY 222 billion (USD 16 billion). The Ministry has identified the steps to develop the rail infrastructure and sustainable transport until 2071 as country’s rail vision under which also includes the construction of 600 km rail junctions to provide connections to the logistics centres, factories, industry, and ports. The installation of signalling systems along the lines will increase from 65 to 90%. In addition, the strategy will underline that the systems and vehicle components should be produced in Turkey with a local content of 80%.

The investment projects will be implemented on the east-west axis, but also on north-south direction providing increased access to the ports and logistics centres. The goal is to increase the share of rail in logistics to 45%.

A Railway Energy and Climate Change Action Plan will be prepared to ensure the implementation of the strategies will reduce carbon emissions. “Whatever we do for our country, it is our duty to leave a more livable, greener, carbon neutral Turkey for our nation. We continue to work intensively with our railway sector,” Karaismailoğlu said.