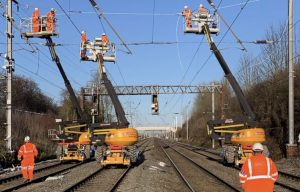 Network Rail will perform works to install the final section of the overhead line equipment on the Midland Main Line to prepare the introduction of the bi-mode trains to run on the line between Bedford and Corby, via Kettering.

Work has already taken place to commission and test two new substations on the route to provide the power which is needed to allow more trains to run in the future. Vital work will also be carried out to test the electrical system, upgrade sections of the track on the Midland Main Line and improve the surfacing of the platforms at Wellingborough and Kettering stations.

At Kettering station, by the end of 2020, the rail infrastructure manager will extend the platforms 1,2,3 and 4 and trimming back to platform canopies to accommodate electrified overhead wires. Station’s lighting, CCTV and passenger information system will be modernised.

“This work to install the final section of the overhead line equipment and carry out vital testing is a major step towards the completion of the Midland Main Line Upgrade, which will bring improved, faster journeys for passengers, with more seats and a more reliable railway,” Gavin Crook, Principal Programme Sponsor for Network Rail, said.

In February, Network Rail started the commissioning and testing of three new substations along the route, as well as a new 400kV National Grid supply point at Sundon, which will feed power to the railway.

The project is part of the GBP 1.5 billion (EUR 1.68 billion) Midland Main Line upgrade plan which will create additional resilience to the operational railway and an improved timetable. By 2023, the railway line will be electrified, with have modernised track and signalling system, station platforms lengthened, bridges and tunnels remodelled.

The line has a ridership of 13 million passengers, and it is expected that passenger traffic will increase by 130% in 15 years.