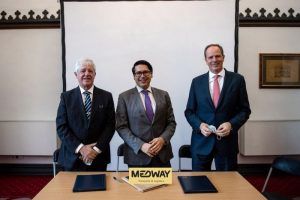 The European Investment Bank (EIB) signed a EUR 45 million loan agreement with Medway Rosco for the implementation of a rail freight transport expansion programme in Portugal and Spain.

The contract was signed by the Vice President of the European Investment Bank, Ricardo Mourinho Felix, the President of Medway, Carlos Vasconcelos, and the Executive President of Santander Portugal, Pedro Castro e Almeida.

The EIB is co-financing this operation with Banco Santander Totta, the Portuguese subsidiary of Banco Santander, based on a project finance structure. 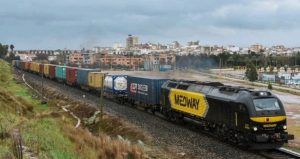 The EIB financing will also enable Medway OFM to expand its rolling stock through Medway Rosco’s acquisition of 16 electric locomotives and 113 intermodal wagons, contributing to the expansion of rail freight transport services and enabling a modal shift from road to rail.

The new locomotives will provide additional capacity of around 1.5 billion tonne-km – equivalent to approximately 54% of the overall rail freight market in Portugal – for new services that could include the transport of lithium, wood, chemicals and other products as well as new regular container lines from the port of Sines to various destinations across the Iberian Peninsula.

Medway is offering integrated logistics solutions and owns a fleet of 69 locomotives of which 35 electric and 34 diesel, and 2 568 wagons.

In addition, the project supports the development of electric rail transport, and will facilitate cross-border traffic as well as intermodality thus improving the effectiveness of freight transport chains.

“This investment reflects Medway’s commitment to improving its activity and efficiency, in order to meet not only the challenging expansion programme in which we are involved, but also the demands of decarbonisation and sustainable economy, as well as the needs of our customers and the entire logistics industry,” Medway President said.

Under its plan, Medway Rosco will generate a positive impact on the employment market by creating around 940 jobs during the implementation phase (2022-2023) and 56 new jobs during operation.