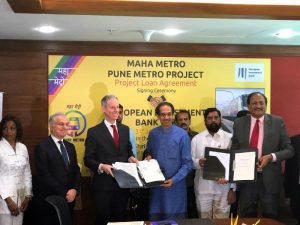 On January 31, the European Investment Bank and Maha Metro Rail Corp signed the EUR 600 million loan agreement for the construction of the Pune metro system which also includes the procurement of the new metro trains.

Under the agreement, EIB has provided the first tranche of EUR 200 million. “Pune metro rail will improve the living conditions of three million people in Pune. It will enable more accessible and affordable access to workplaces, healthcare, education and markets, while protecting the environment and improving the quality of air in the city,” Andrew McDowell, Vice President of the European Investment Bank said.

Estimated at EUR 1.78 billion, the Pune metro project envisages the construction of two lines with a total length of 31.3 km, served by 30 stations. 102 modern metro cars will be also purchased as part of the project.

The first line will have a length of 16.6 km with 14 stations, of which five will be underground and nine will be elevated. The line will link the PCMC (Pimpri Chinchwad Municipal Corporation) to Swargate. 14.6 km of new metro line will be completely elevated constructed as part of the Line 2, linking Vanaz to Ramwadi.

In November 2019 the first TBM started tunneling works, while the second one was inaugurated in January.

Pune metro system will be equipped with Alstom’s Urbalis 400 solution under a contract awarded by the Maha Metro Rail Corporation in March. 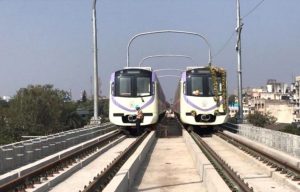 The metro trains will be supplied by Titagarh Firema. 25% of the new cars will be manufactured in Italy, while 75% will be built and commissioned at Maharashtra metro car manufacturing plant in Nagpur. Initially, three-car train will be deployed on Pune metro lines and will subsequently converted into six-car trains following traffic demand.

In 2019, French Development Agency (AFD) also provided EUR 245 million loan for Pune metro project, which will be used for system and some civil contracts.

The Pune metro physical progress achieved 37% in January 2020.  It is expected that the Line 1 will be operational in 2021, reducing the travel time within the city by 75%. Once completed, the city’s metro rail will create 900 new jobs and allow around 600,000 safer, affordable, punctual, and faster commutes each day.